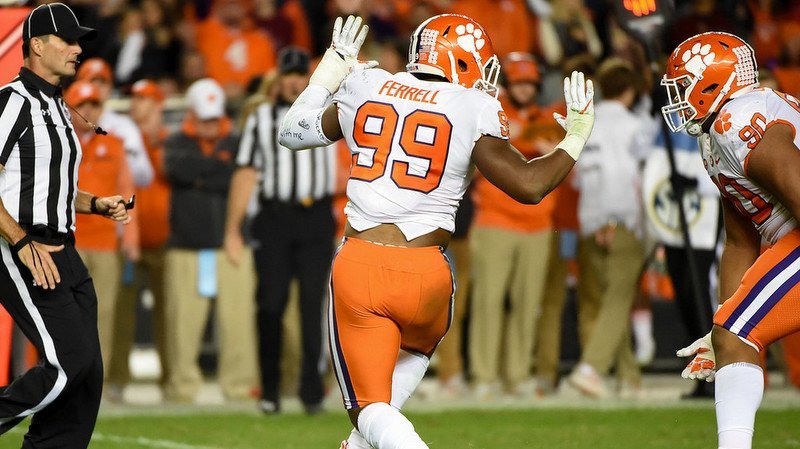 CLEMSON – Another week, another prolific offense for the Clemson defense.

A week after taking on Syracuse and it’s fast attack offense, Brent Venables’ group faces a Wake Forest offense that is ranked 23rd nationally in total offense and averages 38 points per game. The Demon Deacons are also one of the fastest offenses in the nation, averaging 86.60 plays per game (third overall).

“There will be a carryover from this game. Got to play with technique and discipline as well as the conditioning aspect of it,” Venables said. “Syracuse had a variety of different packages that they liked to do. Wake keeps the same personnel on the field the whole game, which doesn’t allow you to substitute guys. I think that’s why they are at number 2 in terms of tempo. (Texas Tech is number one). Wake does a good job with RPO’s, it's like a different style of the option.”

The Deacons are led by quarterback Sam Hartman and wide receiver Greg Dortch.

“Sam has done a great job for a freshman coming in there and having the kind of success he has had. Says a lot about his instincts and the coaching staff’s ability to coach him,” Venables said. “He and Jake, my son actually became good friends at the Shrine Bowl. I got a chance to meet him and his family. Hartman has that IT factor right away. No surprise he has had success right away.”

“Dortch is a player every team wishes they had on their team. A very dynamic player in the return game and in the slot. Great playmaker and a tremendous competitor. K’von Wallace played with him and he won a state championship over there at Highland Springs in Richmond. He made a big play in the game last year with about a 40-yard pop pass over the middle. He ran away from Dorian O’Daniel, who was one of our fastest players last season. He can catch the short route and take it for a short route or take the top of the defense.”

“A lot of pride. Happy for them. A validation for doing the little things well,” he said. “They had maybe 8 possessions in the second half and we gave up just one score. If we just stay home on that fourth and one, we have a chance to stop them there. Someone got a little nosey on the line. I think a 27-yard drive was the longest drive of the second half. I think it is just confirmation of everyone doing your job and doing the little things well. Nobody has to play like Superman. It was awesome to be out there at the end and keep them from moving the ball.”

The Tigers brought an extra defensive end into the game late – using Xavier Thomas, Clelin Ferrell, and Austin Bryant at the same time – and Venables said the formation is something that fans will continue to see.

“We’re just trying to find ways to continue to add depth to our front. We want as much speed on the field as we can get,” he said. “Sometimes just because a guy is faster doesn’t mean a guy is better. Otherwise, you put Isaiah Simmons out there at defensive end and just let him go to work. There are other guys who are better than him. You want football players who can go out and execute. That will be something we continue to expand on.”