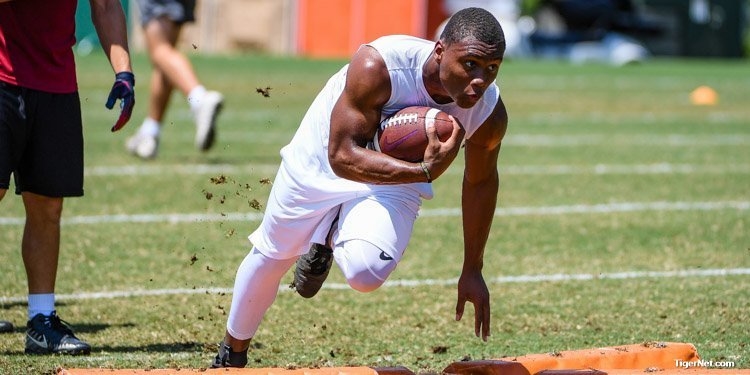 Another Termite was on the practice fields at Clemson recently and this one was doing damage with his legs.

Keith Adams, Jr., visited the campus for three days of head coach Dabo Swinney’s high school camp in mid-June, working with running backs coach Tony Elliott. The younger Adams is a 2022 prospect out of Cherokee (GA) Canton, a school that sits not too far from Atlanta.

Julius Adams played 206 games for the New England Patriots during a stellar NFL career. Julius is the father of Keith Adams, Sr., and therefore the grandfather of Adams, Jr.

The youngest Adams had a blast at the Clemson camp.

“It was a great experience. I had a lot of fun and I learned a lot of new techniques that I never knew before. It was just a great experience,” Adams told TigerNet. “It's great to come back and see Clemson. But it's also been fun to see all of the other schools that are recruiting me, too. I am just enjoying the process.”

Adams spent a lot of his time listening to what Elliott had to say.

“I am really an all-around running back. I can do anything, but it was great talking to Coach Elliott,” Adams said. “He told me to keep working and that I would have a great future.”

“Clemson, of course,” he said. And then Florida St., Florida, Syracuse, Texas, and South Carolina are other schools I've visited and really liked.”

Adams says he’s going to take his time and enjoy the recruiting process, and that it helps to have his biggest fan ready to share his experiences.

“It definitely helps me that my dad has been through this. He knows all about it and I really appreciate it,” Adams said.