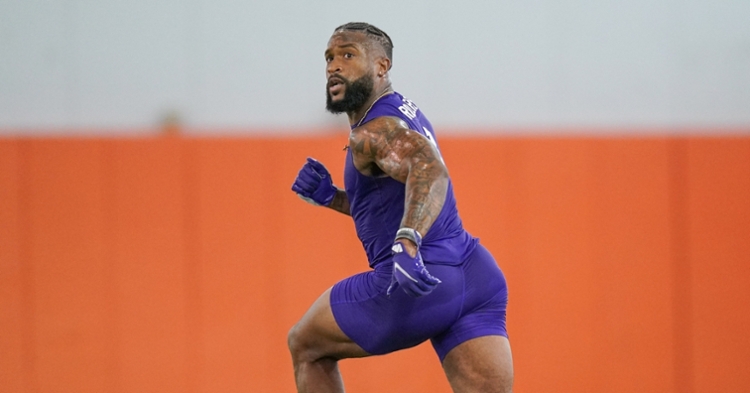 Rodgers is expected to be a day two selection in the NFL Draft (Clemson athletics photo).

The Clemson Athletics website describes former wide receiver Amari Rodgers as the “consummate professional,” a trait that was evident during his four-year career. But when it came time to speak to the kids at his football camp Saturday afternoon, Rodgers just wanted them to know that football is all about fun.

Rodgers held a youth football camp at the Kroc Center in Greenville on Saturday. About 100 football players aged 6-16 turned out to catch passes and learn the game of football from Rodgers and others including current Tiger, Darien Rencher.

Rodgers said he told the kids in the camp that he simply wanted them to have a good time.

"Don't just think too much about how you perform, it's always about having fun and doing what you love,” he said.

Rodgers was a key figure in Clemson’s four-straight College Football Playoff berths from 2017-20. He earned starting roles at receiver and punt returner in 2018 and contributed in those roles in 2019 after a remarkable comeback from injury and then recorded a career year as a senior in 2020.

Rodgers concluded career with 181 career receptions for 2,144 yards with 15 receiving touchdowns in 1,901 snaps over 55 career games (37 starts). He is also credited with 68 career punt returns for 529 yards (7.8 avg.) including a punt return touchdown. Rodgers became only the fifth Clemson player since 2000 to record touchdowns by rush, reception and punt return in a career.

The next step in Rodgers’ career takes place later this month with the NFL Draft. Rodgers is picked by many to go on day two of the draft, and recent reports have suggested that the Jacksonville Jaguars – who own the No. 1 pick and are expected to take Trevor Lawrence – are considering pairing Rodgers with his former teammate.

"I know Coach Meyer said recently he wanted to surround Trevor with people he's familiar with,” Rodgers said. “So that would be the perfect opportunity to link me and Trevor back up and we can shake the league up for sure."

What does Rodgers think he brings to the table?

"To be able to show I play bigger than what I am that's one of the boxes I wanted to check,” he said.

No. 10 Seminoles pull away late in series opener

N.C. lifts capacity limits ahead of schedule before Clemson-Georgia
Post your comments!