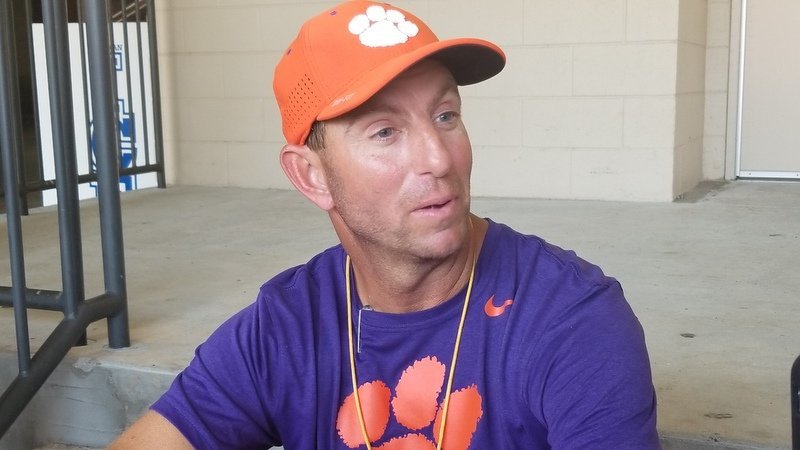 CLEMSON – It’s no surprise that most-viewed story all-time in TigerNet history happened after head coach Dabo Swinney’s rant back in 2011.

Way back on December 1, 2011, a Thursday, the Tigers were preparing to take on Virginia Tech in the ACC Championship Game and Swinney held his weekly post-practice media availability outside the practice fields.

The Tigers were coming off yet another loss to South Carolina, and Swinney was asked about some comments allegedly made by Gamecock head coach Steve Spurrier that the University of South Carolina wasn’t Clemson: "We ain't LSU or Alabama but we ain't Clemson either."

It wasn’t until later that it was found out that it wasn’t Spurrier who made the comment, but the proverbial dye cast. Swinney was asked – by me – about the comments and he appeared to take umbrage at first. What followed was pure video gold.

“I heard that. That kind of thing gets back to you,” Swinney said. “I don’t know if he said it or not, but I guess he did because there hasn’t been a rebuttal. If he said that, I am disappointed because I was taught to win or lose with class. That is kind of a childish thing to put out there, to be honest with you. I think our program here speaks for itself. I guess I would have to say I agree with him. He is right. They are not Clemson and they aren’t ever going to be Clemson, to be honest with you.”

“No three-game winning streak is going to change that,” he said. “It’s not the first they have won three in a row and it will not be the last time. It might be 50 more years but it will probably happen again. But I have gone out of my way to be complimentary to them and complimentary to coach Spurrier. I got a lot of respect for coach Spurrier, but I am going to defend my program. I’m going to defend my players and my coaches. I am going to defend Clemson University because I believe in it. I think he is exactly right - they are not Clemson and never will be. You are looking at the best era in the history of South Carolina football right now. They just had their second 10-win season. They won a championship in 1969 and the 2010 SEC East. And this rivalry – there is a lot of rivalries out there but this is more of a domination and that’s a fact. My kids’ grandkids won’t live long enough to see this really become a rivalry.”

He went on to say that Clemson has a different standard than South Carolina.

“I have respect for their program, but South Carolina is not Clemson,” he said. “There are a lot of differences. This is a place that has won a national title, 17 conference championships, and two division titles. Heck, we have won more bowl games than they have ever been to. I think our program has 100 plus more wins than South Carolina. That is reality. This is the best era in 115 years of South Carolina football is right now and they have done a great job.

“Coach Spurrier has been there for seven years, but after five years I think he had 35 wins and got a new contract and all that kind of stuff. After five years at Clemson, if I have only got 35 wins there is going to be a new coach here and you know what, there should be because there is a different standard. He is exactly right – they ain’t Alabama, they ain’t LSU and they certainly are not Clemson. That is why Carolina is in Chapel Hill, USC is in California and the university in this state always has been and always will be Clemson. It’s right here in Clemson, SC. You can print that. Tweet that.”