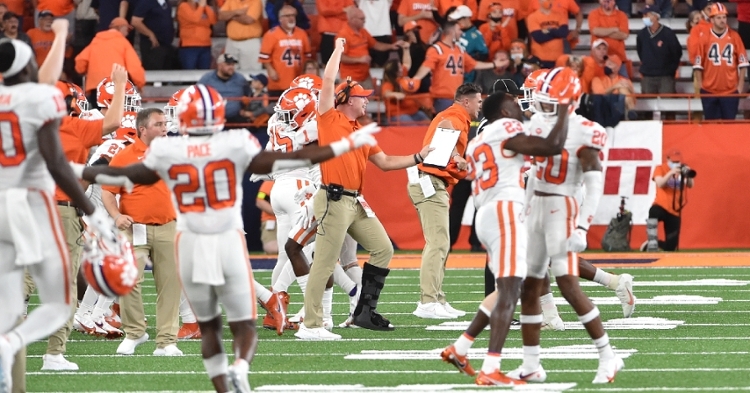 A Clemson defensive assistant joins in the celebration.

SYRACUSE, NY – There was a moment, in the rush of a postgame celebration, in which I was reminded that how the coaches and players feel after a game like the one we saw Friday night is far different than how the fans and media feel.

As Syracuse kicker Andre Szmyt’s field goal went wide left, Clemson defensive graduate assistant coach Jacob Maloney (I think) hobbled out onto the field, one of his feet in a cumbersome walking boot, and he met the defense coming off the field. As the first defenders reached him, he threw one arm into the sky in triumph, the boot firmly planted at the 20-yard line.

The defenders swarmed around Maloney, jubilant in the win, as the rest of the sideline jumped for joy.

The players and coaches then made their way down to the end zone where I was shooting, locked arms and listened to the pep band play the alma mater. Head coach Dabo Swinney and defensive coordinator Brent Venables grabbed an exhausted James Skalski and all three smiled and sang their way through the chorus, happy that they would be leaving Syracuse with a win.

I quickly grabbed my phone and joined the other world – the world of criticism and fan discontent. I hadn’t checked my phone since halftime – I don’t have time for it during a game and really don’t want to – and sure enough, the litany of complaints was long and steady.

The complaints were the same ones we’ve heard about, read about, talked about, and written about for weeks – the playcalling is bad, the quarterback play is bad, the offensive line is bad, the receivers are bad, etc.

I shoved my phone in my pocket and headed to the photographer’s workroom. Along the way, I could hear the commotion inside the Clemson locker room – laughter, screams of joy, music thumping. I was sure there was plenty of dancing involved.

I once again was struck at the dichotomy – in a locker room there was joy and relief at getting out with a win, and in living rooms and cars and hotel rooms, there was anger and frustration.

Both sides have a right to feel the way they feel, and that’s just where we are with this team and this season. Head coach Dabo Swinney made mention of the fact that the Tigers were without 14 scholarship players against the Orange. That included the team’s best cover corner, Andrew Booth, who nursed a hamstring injury all week.

Yes, there is youth and yes there are enough injuries to to last two seasons. But there are also mistakes galore – veteran offensive linemen jumping early, veteran receivers dropping catchable balls, open receivers missed with bad passes, blocks missed, etc. The list goes on. And there is also the feeling that despite the injuries, this team should be better than this. The offense shouldn’t be this bad.

I saw the Syracuse defense up close, and there is no way a Clemson offense should gain just 314 yards against that outmanned and outsized group. But here we are. And perhaps it’s time to understand this is the way it’s going to be the rest of the year – the coaches and players will be happy with the small steps, the fans will be unhappy that bigger strides aren’t being made.

Sometimes, a different view can provide clarity. Other times, as in Friday’s win, things become even murkier. Next week will provide a stiffer test – on the road at Pitt. Will there be dancing in the locker room and a lack of joy in the living rooms, or will the mistakes come back to haunt both sides?

We have seven days to find out.