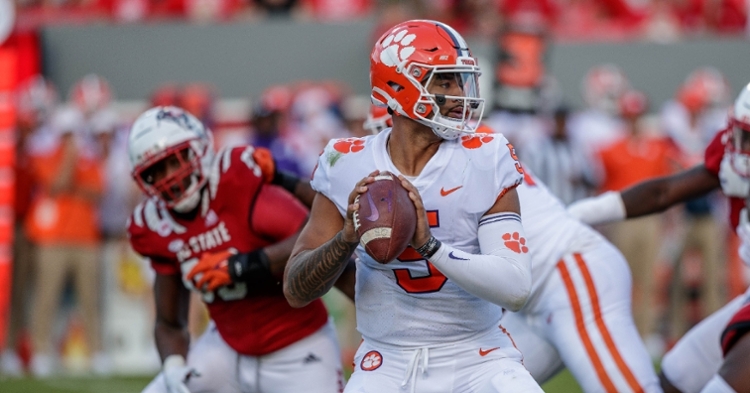 Clemson's offense struggled in the loss to the Wolfpack.

The two teams battled throughout the contest with Clemson once again not finding any rhythm offensively.

If the defeat wasn’t difficult enough, James Skalski, Bryan Bresee and Will Shipley all suffered injuries.

"He didn't have anybody open, but once again straight-stem routes, nobody is getting mesh points or easy pick plays, where is the creativity? Seems like they not only don’t have an identity but their offensive play-calling is a little archaic."

Clemson head coach Dabo Swinney was asked about the comment and said Clemson isn’t living up to expectations.

“We run the zone, counter, power, that's been really good for a long time,” Swinney said. “But the criticism is warranted because that's where we are right now. With the way we’ve performed, you’re gonna get criticism and you’re gonna get comments and things like that and you know what? That comes with the territory because of the expectation and the standard at Clemson and who we are, we’re not meeting that. It’s that simple. People are going to say whatever they want and we can’t say anything because we’re not getting it done right now.”

Clemson’s defense kept the Tigers in the game when the offense couldn’t get anything going, and Baylon Spector’s play stood out over everyone.

If you’re keeping score, Clemson had 180 yards against Georgia in the opener. Then there were 504 yards against SC State in game two. Just 284 against a bad Georgia Tech defense, and then 214 against an average NC State defense missing three starters. That means Clemson has 678 total yards in three games against Power 5 teams, for an average of 226 yards per game. In the past, we’ve seen them put up those numbers in a quarter.

The two worst teams on offense last season, that played more than five games, were Syracuse and Kansas. Syracuse averaged 265 yards per game and Kansas averaged 259. Those are abysmal numbers, and Clemson is on a steady heading towards that type of season.