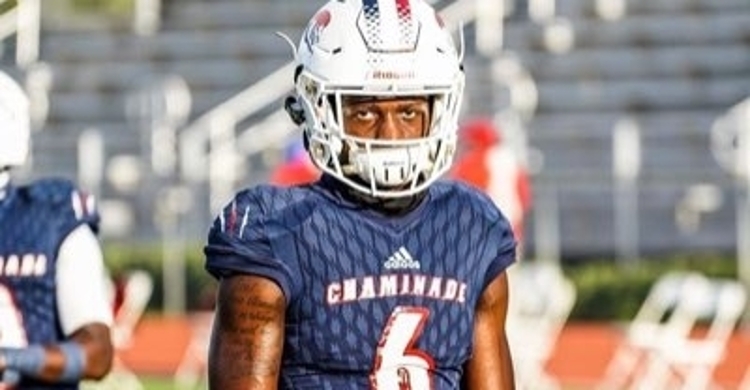 The Clemson secondary was missing several players during Saturday's spring game and had issues keeping everyone healthy last season. One of the top-rated 2022 cornerbacks out of Florida was in town Saturday for the festivities and thinks he has a chance at early playing time.

Ryan Turner (6-0 180) of Hollywood, Florida, is another big-time 4-star corner strongly desired by Clemson defensive coordinator Brent Venables and cornerbacks coach Mike Reed. Turner and his family are similarly interested in the Tigers and spent four days last week on campus. They culminated the visit by attending the spring game Saturday.

“For players, it may seem like a scrimmage or like a competitive practice, but they were playing as a game,” Turner said. “People going crazy on the sideline, players jumping around once their teammates made plays, I was really surprised by that.”

Turner was on a personal visit in that due to the NCAA Dead Period, he wasn’t allowed to meet with the coaches or go inside the athletic facilities. He and his family members had to buy their tickets just like any of the other fans. He also had to find some things to do around Clemson for the time they were there.

“Spring game, me and my parents drove around the campus a few times, seeing the campus at nighttime, seeing the campus during the day,” Turner said. “We ate at some famous restaurants in the city. It’s cool, a very relaxed city, a very laid-back city. I thought the campus was smaller, but seeing it in person, it’s bigger in person. I can adapt to it, basically.”

As for the football team, Turner, of course, focused on the cornerbacks, or lack thereof, on the field during Saturday’s game.

“That means it’s a chance I could play early. That’s really what I like about the situation that they have at corner,” Turner said. “I love how coach Venables has his corners disguise the coverages. You really don’t know if they are in man coverage or in zone. I really like that. I think they have four scholarship corners on the roster right now, so that’s a big thing because that means I have a better chance of playing early there than going to a school that has six or seven corners already on the roster.”

Turner didn’t get to see Venables or Reed while in Clemson, but they were quickly on the phone with him once his visit was over.

“They really just asked me how I liked it and what I liked about it,” Turner said. “They were really just telling me I’m a a top guy on the board, so we’re not putting any pressure on you to commit, but we want you.”

Turner also has been to Ohio State unofficially and is going to check out Boston College this week. He is returning to Ohio State for its spring game April 17th, and has scheduled an official visit with the Buckeyes for June 11th, the same weekend of the Clemson Elite Retreat. He is also considering a visit to Ole Miss.

Miami also is a factor, and Turner said he can easily visit Coral Cables anytime, but he hasn’t been there much. He said Clemson, Ohio State and Boston College have been recruiting him the hardest.

Turner is rated a four-star in the 247Sports Composite and is ranked 33rd nationally among 2022 cornerbacks (as high as the No. 20 CB by Rivals.com). He had 45 tackles and two interceptions last season.