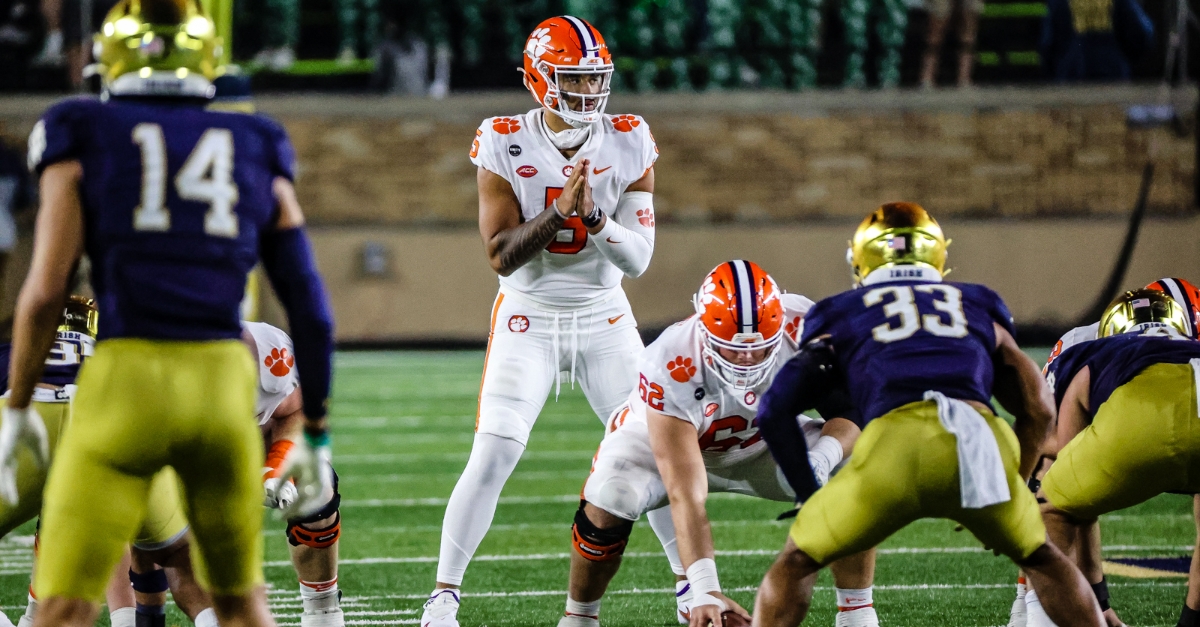 We will have a good idea of what DJ Uiagalelei can do this season by the time November and the trip back to Notre Dame rolls around.

Clemson’s 2022 schedule is one of the more appealing slates it’s had in recent years. It includes seven home games, a marquee non-conference opponent, and a home game against the Gamecocks, who Clemson has not hosted since 2018. I’ve divided the schedule into four sections. Let’s analyze each one.

While it is exciting to have a bigtime matchup like Georgia, Texas A&M, or Auburn in the first few weeks of the season, a slow launch may be more advantageous. Last season, the Tigers struggled with Georgia Tech en route to an uncomfortable 14-8 win. A repeat performance will lead to major handwringing among the fans. Conversely, a blowout win will have many convinced the offense is completely fixed. The opener will set the tone.

Home games against Furman and Louisiana Tech will give Clemson a chance to develop some depth before some of their biggest challenges of the year. We should get a lot of looks at freshman QB Cade Klubnik during this three-game span. While the opponents don’t have a ton of sizzle, we’ll learn if DJ Uiagalelei and the wide receivers have improved enough to make Clemson a serious National Championship contender. That’s enough to give this portion of games plenty of intrigue.

I’d give Clemson about 99% odds to win these games. They should be 3-0 as they enter the meat of the schedule.

The Atlantic Division is very deep this year, but Clemson’s two prime competitors will likely be the Demon Deacons and the Wolfpack. Wake Forest’s offensive scheme relies on a slow mesh that doesn’t work well against Clemson’s dominant defensive line. They may be a good team that ends up winning eight or nine regular season games, but I don’t expect one of them to come against Clemson.

NC State’s Dave Doeren smoked a victory cigar after beating Clemson at home in overtime only for the Wolfpack to squander the division and fall short of 10-wins. Unfortunately, for Clemson, they bring a lot of experience back and won’t be intimidated. This may be the best game on Clemson’s home schedule. NC State starts the year with four relatively soft non-conference opponents (at East Carolina, Charleston Southern, Texas Tech, UConn). It is easy to envision them coming into Death Valley at 4-0 and ranked in the top 10. Back in 2018, No. 16 NC State was 5-0 when they came to Clemson and got blasted 41-7. I can certainly see a similar scenario giving Clemson sweet revenge. Admittedly though, NC State should be a tough opponent.

I’d estimate Clemson to have a strong 85% chance of beating Wake Forest and a 75% of beating NC State. When you run those numbers along with the 99%+ against each of the first three opponents, Clemson is at 4.6 expected wins through five games.

After the NC State game, the schedule eases up a bit. The Tigers go on the road to play Boston College, where Swinney's team has won 5-of-6 times since 2008. They then turn around and go to Florida State. The Seminoles should be improved and provide a legitimate test, but they should still be no more than the sixth-best team on the schedule. They close October with what will likely be the weakest team in the Atlantic Division, Syracuse.

I’m very confident that Clemson can go 3-0 during this stretch. I’d give Clemson a 90% shot to beat Boston College, 85% against Florida State, and a whopping 95% against Syracuse. When you run the math on that, it puts them at 7.3 projected wins through eight games.

Clemson’s November slate is one of the toughest they’ve had in at least the past decade. It starts with a road trip to Notre Dame. The Irish travel to play Ohio State and BYU before they face Clemson, so they will likely have at least one loss. Nevertheless, they still have a good chance to be a top 10 team when they face the Tigers. It’ll be a night game in the November cold of Indiana and provide the stiffest test of the year.

Louisville gave Clemson a great game last year and although it is back in Death Valley, they should be a tough out for Clemson. Malik Cunningham is very experienced. The “super senior” will be 24 years old by the time the Clemson game arrives and he has “had it circled” since their close loss last year. Louisville’s schedule is backloaded with Clemson, Pittsburgh, and Kentucky to close out the season. They very well could be 7-2 or better coming into Clemson. It is at Death Valley and Clemson will be favored, but it could be an exciting game.

Things don’t let up at all after that as Miami, the Coastal Division favorite, comes to town. Miami has ditched the turnover chain with coach Mario Cristobal taking over. They seem to be getting serious about winning in the trenches. You know a Cristobal team won’t be soft and the Hurricanes always have a decent measure of local talent. This should be one of the two or three toughest games on the schedule.

Clemson hasn’t lost to South Carolina since 2013, but that doesn’t mean this year’s Gamecocks team will be a pushover. Shane Beamer definitely has positive momentum building with high-upside QB Spencer Rattler and TE Austin Stogner joining via transfer from Oklahoma. They don’t have the talent Clemson does, but they may now have enough to provide a credible threat.

Notre Dame is the only true “toss-up” on the schedule. If you put Clemson’s win probability in South Bend at 55%, Louisville at 75%, Miami at 66%, and South Carolina at a confident 80% then you come out with 10 projected regular season wins.

While November provides a brutal four-game stretch, Clemson gets three of the contests at home and should benefit from having eight prior games to figure things out on offense. If they can find consistent QB and O-line play by November, they could make a resounding statement and find themselves back in the College Football Playoff. The schedule sets up a season-long crescendo that provides intrigue each week while building more and more anticipation for the big finish.