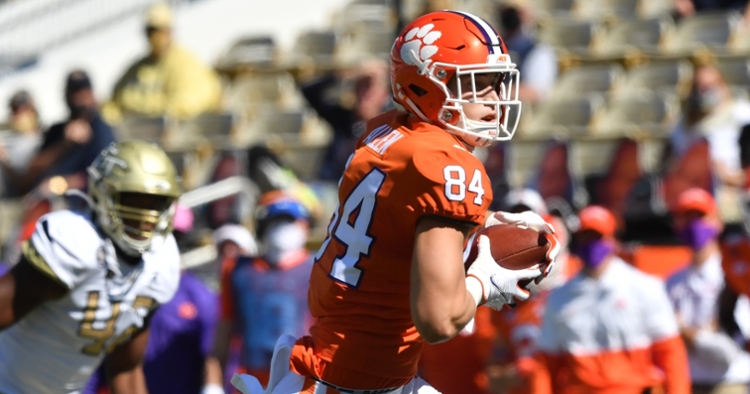 Tight end Davis Allen got wide open for a TD catch last year against the Jackets.

Week three of the 2021 Clemson Football season sees the first ACC opponent for the Tigers, as the Georgia Tech Yellow Jackets pull into town looking for their first win against Clemson in over six years (Sept. 18; 3:30 p.m. on ABC or ESPN). The Orange and White will come off a tune-up game in the home opener the previous week against in-state FCS opponent South Carolina State. Georgia Tech leads the all-time series 50-33-2 but Clemson has won the last six games, outscoring the Yellow Jackets 174-42 in the last three contests.

The Yellow Jackets begin their season with back-to-back home games in Atlanta against Northern Illinois and Kennesaw State, two teams they should beat to travel to Clemson with a 2-0 record. It is the third year of the Geoff Collins era at Tech, one that has had some highs and lows as he tries to find some footing in the ACC. In his first season, Collins led the Jackets to a 3-9 record, and last year after some preseason hype, the team finished 3-7, a disappointing season in some fans' eyes.

Clemson went into Atlanta last season in what some people eyed as a trap game with the speed and youthfulness of the Tech team. Dabo Swinney and Trevor Lawrence put those doubts to rest quickly as the Tigers’ opened up a large lead even before halftime and eventually pulled the foot off the gas when the score became out-of-hand, in a 73-7 final score. Lawrence threw for 404 yards and five touchdowns in just over two quarters of work and had much of the second half off in Bobby Dodd Stadium in downtown Atlanta.

The transformation of the Yellow Jackets offense is still taking its time, switching from the well-known triple option to more of a spread passing attack and Collins has one of the best young quarterbacks in the ACC to help him with that. Jeff Sims led the Tech offense last year, throwing for over 1700 yards and 12 touchdowns, but he only completed around 50% of his passes. The true freshman also ran for five touchdowns and led the offense in rushing yards.

The Jackets offense averaged around 390 yards and 24 points per game last season, but it was a case of when they score, they win, and vice versa. During the 2020 season, Tech was 2-0 when scoring more than 27 points, and 0-7 when scoring 27 or fewer. While Collins has another offseason to improve and move away from the option offense, good luck putting up more than 27 points in Memorial Stadium on a Brent Venables defense.

Tech also needs to work on the offensive line and running game. Last season, they averaged around 180 rushing yards per game, with most of those yards coming from the legs of the signal-caller Sims. Running backs Jordan Mason (2019 third-team All-ACC) and Jahmyr Gibbs need to take the pressure off of Sims a little more in 2021.

The Yellow Jackets' biggest struggle last year was on the defensive side of the ball. Tech gave up an average of 37 points and 460 yards per game. It was especially difficult for the secondary to stop anyone who could throw the ball, hence Lawrence's five-touchdown and 400-yard game last October.

Collins gets some help on the defense this year, as four of his top five recruits from last season all are set to take snaps early in the season, but throwing freshmen into the fire of ACC week-in and week-out might cost the Yellow Jackets some games this season.

While you can see the wheels of the Tech program slowly starting to turn under Collins, Swinney and the Tigers are on another level of competition right now. The mid-September game will probably feel and look like the last few games in this series, hot and humid on the field, and very lopsided on the scoreboard. Expect DJ Uiagalelei to really throw his Heisman campaign into gear here, especially if Clemson pulls out the game against Georgia and he has a good game.

We may see many of the freshmen in the game prior to this one against South Carolina State, but once this one gets out of hand, it’ll be interesting to see how some of them hold up against ACC competition. We could easily see the duo of true freshman running backs Will Shipley and Phil Mafah split the carries in the second half as they look to try and stamp their name in the running back room.

The defense led by James Skalski and Nolan Turner should have no problem controlling the Georgia Tech offense. Sims needs to work on his accuracy, however, because if Tech cannot run the ball against the big boys upfront on the Clemson defensive line, then it could be a long day for Collins and company in Memorial Stadium.