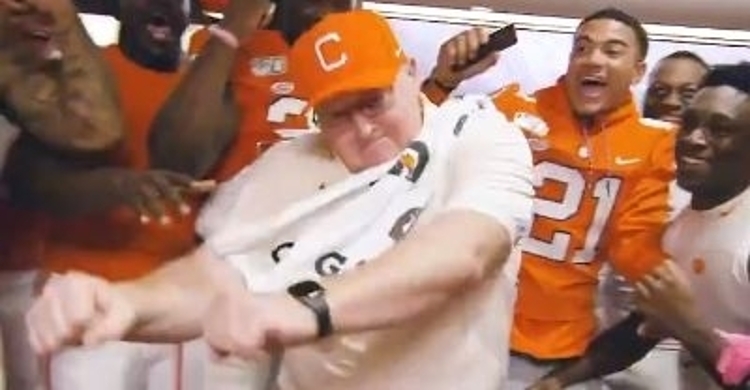 If Robbie Caldwell isn't one of your favorite coaches, he should be.

Clemson’s football team meetings would go a lot smoother and be a lot less fun if offensive line coach Robbie Caldwell would put on clothes.

Head coach Dabo Swinney and his staff are working from home, like most university and state employees, as the nation deals with the COVID-19 outbreak. The players are also staying at their homes until notice is given that they can return to campus.

So how does the team communicate?

"Every day, every (assistant) coach has been communicating with their segment group, just like they would be here," Swinney said. "And I tell you, one of the positives that have come from it, we've all gotten a little more technologically savvy. For our staff, we've had to use Microsoft Teams and Zoom -- two things I've never used. And it's been great. It's not the same as being in a room together but we are able to have our meetings, communicate, and stay engaged.

“I think that's very important that we stay engaged daily as if we were back in Clemson. Our coaches are doing a great job with that. In fact, we just got a daily report on every single player on the roster this morning. And the players I think have enjoyed it as well. We are going to have a full team meeting next week as well. Kind of business as usual for us. Trying to create as much normalcy as we can as if we were back on campus together.”

Swinney said that Caldwell, the Tigers’ avuncular offensive line coach, has made the video calls interesting.

"Been kind of fun to have the staff meetings on Microsoft Teams,” Swinney said, “I'm always kind of always on the screen talking and then when somebody else speaks, their face pops up. Robbie Caldwell had us all dying laughing this morning because he said the only reason his face wasn't popping up was that he said he was naked. He said he always wanted to come to a staff meeting naked, so we all got a big kick out of that.

"The other thing he said was he found out his wife could cook. He didn't know she could cook. He had to go get the stove out the storage shed. So we've had some fun. We've made the best of it and that's what we'll continue to do.”

Meetings are taking place and the lines of communication are flowing. What can’t happen is the on-field and weight room work.

"Obviously the biggest thing we can't do right now is practice. We had two more weeks of spring ball before the spring game, this week and next week,” Swinney said. “We don't have practice to grade or prepare for and we are not hosting recruits on campus, so that's a change. But we are still carrying on what we got done in spring ball with evaluations.

“We are going to start our exit meetings after next week. For me, that's something that usually takes three weeks to get done with so many players. This year, I'll do every one of them on FaceTime. We are putting all the player evaluations and summer planning and summer projects together. The No. 1 thing right now is having those daily meetings with your players."