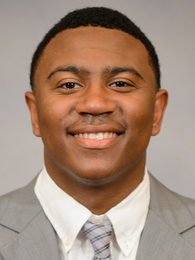 Running Back
B I O
Has 599 yards and four touchdowns on 147 carries along with 18 receptions for 155 yards and two touchdowns in 488 snaps over 44 games (three starts) in his career.

2016: Part of a trio of offensive players named Most Improved at the team banquet ... produced 211 rushing yards on 47 carries in 172 snaps (15 games) ... posted two carries for eight yards in win over Boston College ... leading rusher for the Tigers against NC State after Wayne Gallman left with an injury; posted 16 carries for 56 yards ... notched 24 yards on five carries against Syracuse ... scored on 18-yard touchdown reception in win over state rival South Carolina, part of a 64-yard total effort ... posted five carries for 40 yards against Virginia Tech in the ACC Championship Game, including a career-long 27-yard carry ... caught second touchdown pass of the season in the Fiesta Bowl, a 30-yard strike from Deshaun Watson in the Tigers' 31-0 win over Ohio State.