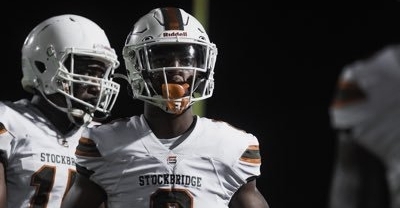 Shelton Lewis is a tenth commit out of the state of Georgia for the Tigers.

Clemson went back to the Peach State for another 2023 pledge.

Lewis is a former Pittsburgh commitment who also had North Carolina among his finalists. He had nearly 30 offers, also including Arkansas, Louisville, Georgia Tech, Maryland, NC State and Mississippi State.

Lewis added his Clemson offer after a stop for the Tigers’ All In Cookout recruiting event in July.

Out of 19 commits now for 2023, ten are from Georgia, including fellow defensive backs Branden Strozier, Avieon Terrell and Robert Billings.

Lewis’ pledge brings Clemson back to the top of the ACC over Miami and seventh overall in the 2023 247Sports Team Composite rankings.

He is a 12th commit on the defensive side of the ball.

Lewis tallied eight pass breakups and a caused fumble as a junior with 31 tackles over 10 games.

IT’S A GREAT DAY TO BE A CLEMSON TIGER!! #We2Deep23 pic.twitter.com/v2zJehVCvv