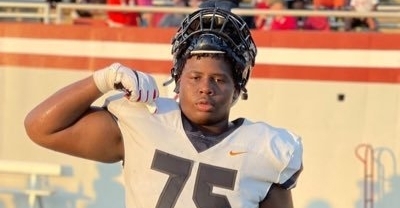 Zechariah Owens could be the next addition to Clemson's 2023 class.

July is set to be a busy month as more top recruits get things settled before football season starts.

Clemson's 2023 class is positioned well and looking to add some more in that period.

Dabo Swinney's 15-man group so far is rated as high as fourth nationally (Rivals and 247Sports Team Composite). ESPN's latest team rankings ($) have Clemson in sixth now after Texas surged to third in the wake a number of prospects joining 5-star QB Arch Manning recently. The Tigers have five ESPN300 commitments to the Longhorns' eight, with nation-leading Notre Dame having 11.

At least three Clemson targets announce next week starting with 4-star offensive lineman Zechariah Owens on July 4, who holds a slew of projections to the Tigers.

Four-star defensive end Keldric Faulk announces on July 6 and his destination is more up in the air after recent visits to Clemson, Auburn, Florida and Florida State.

Two days after him, 5-star defensive lineman Peter Woods goes on July 8 in a decision down to Clemson, Florida, Alabama, and Jackson State. Alabama has been the perceived favorite but the Tigers only strengthened their case in early June.

Clemson's current 2023 commit group has 14 of its 15 pledges rated as 4-star or higher prospects (QB Christopher Vizzina being the 5-star in the 247Sports Composite), which is only topped by Ohio State (15).