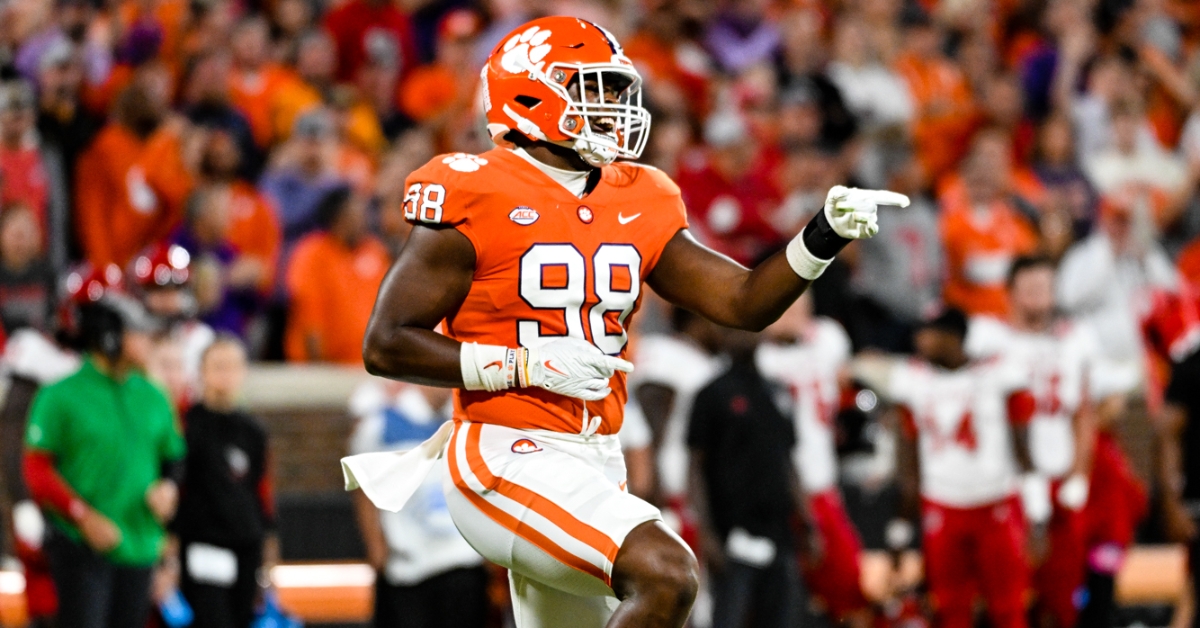 Myles Murphy could be a top-5 NFL draft pick, but that doesn't mean there aren't point to work on with his game.

Defensive linemen Myles Murphy and Bryan Bresee are projected to go with the fifth and sixth overall selections according to the outlet currently, with both ranked as the No. 2 player at each respective position.

Trenton Simpson is picked to go later in the round (30th) but is pegged as the No. 1 linebacker in the draft.

"Simpson is the single best athlete at the linebacker position in the draft class," PFF's Michael Renner said. "Even his frame is impressive, as it’s almost difficult to believe he’s 240 pounds given how little fat he carries. In his first season as a starter, Simpson was primarily the overhang/slot player in Clemson’s defense before switching to a between-the-tackles role this past season.

"Over the past two seasons, Simpson has allowed only 353 yards on 66 targets (5.3 yards per target). His coverage versatility is the sole reason he’s LB1 on this list. That’s because the rest is a bit of a work in progress, which is to be expected with only one season as a true linebacker. But in today’s NFL, linebacker is a coverage-first position, and Simpson could be special in that regard."

Bresee's PFF draft profile breaks down the strengths and areas to improve at the next level.

"Bresee has arguably the best size and strength combination among interior defenders in college football. He is so powerful and quick that he just simply bulldozes linemen," said Mitch Kaiser, who tags the Cleveland Browns, Detroit Lions and Green Bay Packers as Bresee's best fits. "You will not find many defensive tackles who have Bresee's pass-rushing instincts. He posted an 81.2 pass-rushing grade as a true freshman and has maintained a career grade over 66 in that category. His versatility and quickness make him so dangerous as a defender. He also rarely misses tackles, which is so critical when stopping the run.

"Bresee definitely has some room to improve against the run, as his run defense grade is only 63.4 this season. He hasn’t missed very many tackles this season, tallying only eight in his Clemson career. Bresee can also afford to put on about 10 more pounds if he’d like to. Believe it or not, 300 pounds is considered on the lighter side for defensive tackles in the NFL."

PFF's Kaiser says Murphy is "a little bit of a project," but there's plenty to like.

"Murphy used his pure strength and speed to dominate at the college level. He’s so hard to match up against given his athleticism," Kaiser said. "Murphy has excellent pursuit and the ability to just hawk down the quarterback...

"From an athletic standpoint, Murphy is in the top tier among defensive line prospects. But while he will test through the roof at the combine, Murphy still has a lot to develop in his game. Not even 21 years of age yet, he will be one of the youngest prospects in the draft class, meaning he still has a lot of growing to do as a player.

"Truthfully, he’s a similar prospect to Georgia's Travon Walker last season. Murphy will need to work on his pass-rushing moves and improve his technique on that front. Right now, he sometimes looks like a bull running around out there on the field. But he sure does run with a purpose. NFL coaches will teach him the right technique to get the most out of his physicality. If Murphy can develop and improve his skills, he could end up being a Pro Bowl defensive end someday."