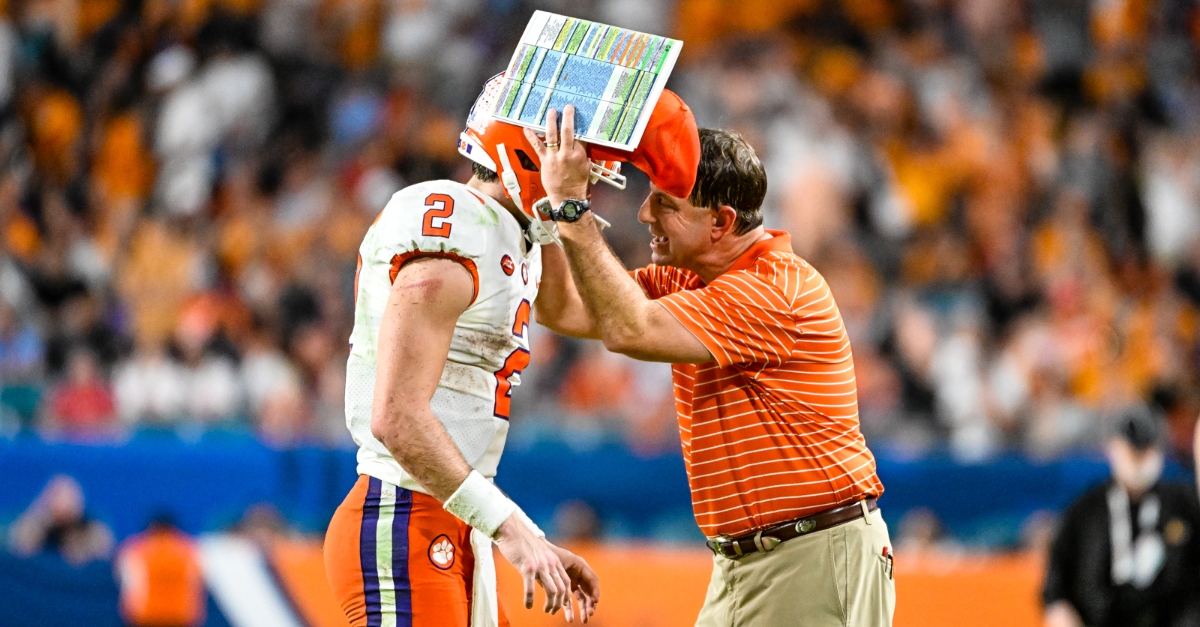 Cade Klubnik had his moments over the freshman campaign, but ESPN's Greg McElroy is eager to see what he will do in a Garrett Riley offense.

The way-too-early rankings almost universally have Florida State as the team to beat going into a new-look ACC slate in 2023. An ESPN analyst who was on the broadcast of the Tigers’ last game agrees.

The new ACC football schedule will be released on Monday after the league did away with divisions and will instead pit the top-two teams by winning percentage in Charlotte’s ACC Championship.

Clemson and FSU are the two teams projected a tier above the rest at the moment in the conference and they will play first in Death Valley and possibly again in December.

ESPN’s Greg McElroy is buying into the hype of a Seminoles program that’s returning key playmakers from a 10-3 season and added nine transfers, which has the FSU ranked second in the 247Sports team transfer portal rankings.

On the flip side, McElroy is among the national pundits calling on Clemson’s head coach to work the transfer portal more, after signing a bigger freshman class this past year and returning more ‘super seniors’ to keep the scholarship numbers tight. McElroy pointed to 10 players going into the transfer portal from Clemson’s end.

“You say that’s really not too many. 10 percent turnover rate, it's not too bad. Problem is you only brought in one guy and that guy's Paul Tyson,” McElroy said, “who's likely going to serve as the backup quarterback to Cade Klubnik. Hey, I'm all for sticking to what you've done. I'm all for sticking to what you believe in, but I do think as times have changed, it would be beneficial for Clemson to consider the possibility of bringing in a player or two in the portal every single year. One – maybe two guys is probably not going to cut it, but if you could bring in five, they could fortify some positions on your roster.

“Maybe a game-changing wide receiver to offset all the attention that Antonio Williams is gonna get on the perimeter. I think that'd be really beneficial. So I hope that at some point maybe Dabo Swinney acknowledges that maybe wants to go through fall or go through spring and see what they have and then address possible needs in the portal at that time, but right now, I think they'll be good. I think they'll be good – don't get me wrong. Clemson's not going anywhere. I just don't know if they are going to be the top dog heading into the ‘23 season in the ACC.”

McElroy believes the Tigers lost some key players off of the 2022 ACC Championship team, but he does like the move at offensive coordinator, hiring Broyles Award winner Garrett Riley.

“We've talked a lot about how they might need to tweak what they're doing offensively,” McElroy said. “Well, they didn't just tweak -- they decided to blow up what they were doing offensively. They fire Brandon Streeter, which almost never happens in Clemson, South Carolina. They decide to bring in Garrett Riley as one of the top offensive coordinators in college football. What a run he had last year at TCU and route to the national championship game. I know a lot of people will say, ‘Well, you played terrible against Georgia.' Fine. Alright, the whole team played terrible, and yes, it was a less-than-stellar performance by him from a coordinator standpoint. Doesn't mean the guy can't coach. He did an amazing job in bringing the most out of Max Duggan throughout the course of last season and that might have been a reason for the move.

“You look at Brandon Streeter you look at what DJ Uiagalelei looked like from the time he started as a starter in 2021 to the time he finished as the starter in the ACC Championship game in ‘22. He never got that much better. Maybe it's a lack of development that led Dabo Swinney to make this significant move and now Garrett Riley is poised with trying to bring the most out in Cade Klubnik.”

Again, however, he’s wondering where Klubnik’s help will come from.

“Now I think Cade Klubnik’'s a good player. I watched him on the field. We called their Orange Bowl game. I watched the ACC title game at length,” McElroy said. “I watched every single snap that he faced last year at times. He looked superhuman. At times, he looked like a freshman, but I know this, Cade Klubnik can't dominate teams on his own. He needs good players around him.”