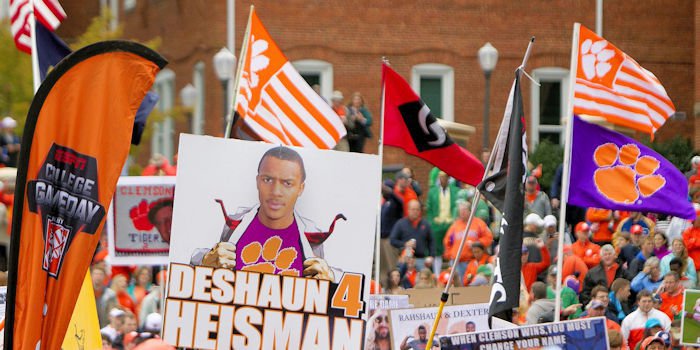 This was a scene from the last time there was a full crowd at a Clemson ESPN GameDay event.

College GameDay is returning in full to Clemson for the first time since 2016.

The signature college football preview show was last on campus during the 2020 season but held in the stadium during COVID restrictions, while a 2019 date was also held in the stadium on a Thursday before the opening of the ACC Network against Georgia Tech.

The last time with a full crowd was the Oct. 1, 2016 showdown between Deshaun Watson and Louisville’s Lamar Jackson, a 42-36 thriller Clemson win.

ESPN is expected to once again emanate from its traditional location on Bowman Field on Saturday. Full details on the event will be released to come. Clemson is 6-1 when hosting College GameDay on-campus.

Clemson, we're coming to your city‼️

Next up, we are headed to see @PackFootball take on @ClemsonFB! pic.twitter.com/NBCZM4VCa9

Death Valley is about to be electric!