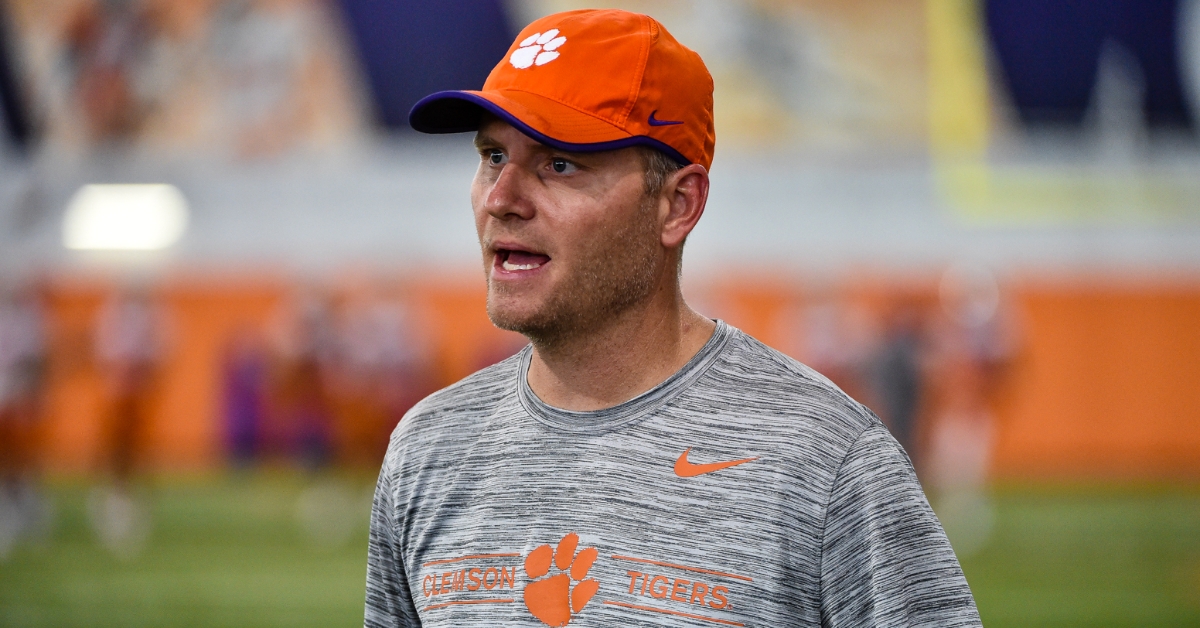 Clemson football had a number of staff moves officially processed after a Board of Trustees meeting on Tuesday.

On offense, quarterbacks coach/passing game coordinator Brandon Streeter is the new offensive coordinator and football staffer Kyle Richardson is moving into Elliott’s role as a tight ends coach. Streeter, a former Clemson QB, has been on staff since 2014 when Chad Morris left for the SMU head coaching job. In his time with the Tigers, Richardson has been an offensive analyst and also worked as Clemson’s director of high school relations, freshman transition and external affairs this past year. He coached Northwestern High School (SC) before joining Clemson.

According to a Clemson news release, Richardson "has been a key off-field contributor to Clemson’s offensive success since his arrival in 2016."

On defense, safeties coach Mickey Conn is a co-defensive coordinator now with former Tigers defensive analyst Wesley Goodwin, the new linebackers coach. Goodwin was a graduate assistant at Clemson from 2009-11, then served as a defensive analyst from 2012-14. From 2015-17, he was with the Arizona Cardinals before returning to Clemson. He is a graduate of Mississippi State and began his career as a graduate assistant with the Bulldogs. He also served as a cornerbacks coach for the 2012 Chick-Fil-A Bowl.

Per a Clemson release, Goodwin "served in a critical off-field role for former Defensive Coordinator Brent Venables, overseeing defensive breakdowns and opponent scouting, assisting with on-campus recruiting and also serving as one of the program’s primary liaisons to NFL scouting personnel and coaches."

“Wesley is one of the best young defensive minds I’ve had the opportunity to work with,” said Bruce Arians, Goodwin's boss with the Cardinals previously. “He was with my staff for three years in Arizona and I saw him grow defensively, and offensively, that whole time. He has a bright, bright future. One thing is for sure – they are going to be an attacking type of defense and I know he is going to do great things with this opportunity.”

Conn moved into the safeties coach role in 2017 after joining the program in 2016 after a successful run at Grayson High School in Georgia. He was a college teammate of Swinney’s at Alabama on the 1992 national title season.

“I’m happy for those who have received the opportunity to go be head coaches and some of our younger staff and peripheral staff that may have some opportunities to go with them as well, but those changes create opportunity here. And, man, I’m just really, really excited about the people that we have in place.

“I’m super excited about Wes being the defensive coordinator and Mickey being the co-coordinator, and I’m similarly excited for the opportunity to promote Mike Reed to be the special teams coordinator and Todd Bates to be our assistant head coach to fill that void that Tony left behind. We have a wonderful staff.

“Offensively, there’s nobody more deserving than Brandon Streeter. Unlike Tony and Jeff in 2014, he’s called a lot of plays in his day. He was a coordinator when I hired him, and he left being a coordinator to come to Clemson. What an amazing job he did with Deshaun Watson, an amazing job he did recruiting and developing Trevor Lawrence and what he’s done from a passing game standpoint. Last year, we passed for more yards per game than any Clemson team ever. He’s just so deserving, so well-prepared. He’s had opportunities to go to the NFL, he’s had multiple opportunities to go be an offensive coordinator in the SEC and elsewhere, but ‘Street’ has stayed here and has been patient knowing an opportunity would come — and that time has come. I’m really excited for him to take the reins and lead us into this bowl game and into the 2022 season.

“And I’m also excited to hire Kyle Richardson. Man, Kyle was one of the best high school coaches in the entire Southeast. Talk about a guy that’s been patient. I hired him, I think he was coming off his third straight state championship appearance, and the same thing as Streeter: he’s had opportunities and he’s stayed here for a chance to coach at Clemson. He is one of the brightest and most well-prepared guys that we have to step into this role and be the tight ends coach and passing game coordinator. He has got a great acumen for football. He brings great leadership ability from being a head coach for a long time. This is a great next step for him. He’s done a lot of different things within our program in support staff roles, and I’m just really excited to see him have this opportunity just like when I hired Mickey a few years ago but we hadn’t had any change that gave us an opportunity to get him on the field until now. I’m so thankful that he stayed patient and thankful that now I’ve got the opportunity to hire him.

“Our staff is set. We’ll have some other things that will take place as far support staff and things like that that we are restructuring, but I’m really happy for them. Thad Turnipseed, I can’t say enough about him. He’s got a great opportunity with Brent and I’m happy for Brent because Thad can help him for sure. I’m so thankful for Thad; he’s been with me now for many years, and what an unbelievable job he did in helping me navigate so many different things from an external affairs standpoint, facilities, you name it. He’s got a chance to really go be the chief of staff for Brent and really help him in a lot of areas that Brent wants them to grow in. Happy for Thad and his wife, Melissa, and I’m thankful for them.

“Moving forward, I am excited and energized by this deserved opportunity for so many members of our staff in new roles. But most of all, I’m happiest for our players. More than anybody, they know what this group of coaches is capable of, and our players’ excitement to see them in these roles has been amazing.”