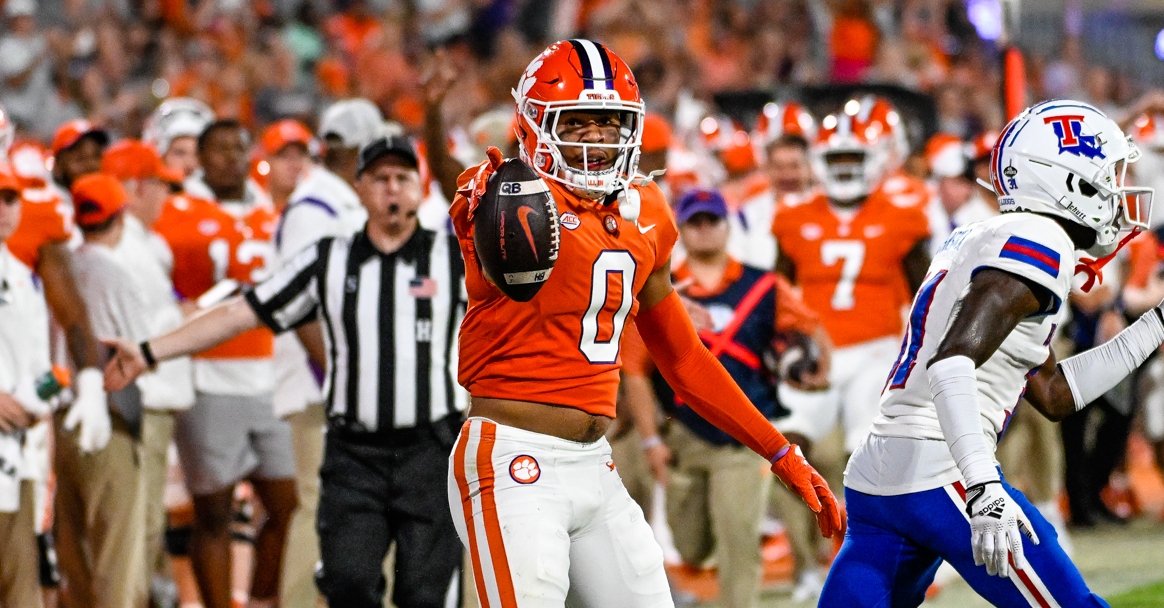 Freshman receiver Antonio Williams has been a boost to a fairly-efficient Clemson offense through three games.

No. 5 Clemson is a single-digit favorite for the first time this season as it hits the road to fellow early undefeated No. 21/16 Wake Forest on Saturday (noon/ABC).

What have we learned about these teams through three games?

Advanced metrics are all over the board on the Deacs, while a mix of reputation and a mixed bag of efficiency guides solid early rankings for the Tigers:

In the three metrics tracked here, Clemson is as high as No. 34 nationally as an offense and both the SP+ (2) and FEI (4) give the defense the benefit of the doubt as a unit. The FPI appears a little more tethered to this season's results over preseason data, with a No. 40 defensive mark that more resembles the Tigers' total defense ranking currently (35th).

Wake Forest is a hard team to put a finger on but there is agreement that the regular polls have them as overrated, with no metric ranking them higher than No. 35 overall. The offense is up as high as No. 9 (SP+) and as low as 65th (FPI), while defensively the trend continues with a near-top-25 mark with the FPI (26) and a lower half mark with SP+ (81).

That’s a lot to say we’ll know a lot more about them after Saturday, and facing the reigning division champs, the same is probably about as true about Clemson.

1. QB Sam Hartman - The Deacs’ upset bid will fall on the shoulders of the veteran Hartman, who has improved his early numbers in completion percentage (62), yards per attempt (8.8), NFL passer rating (111.5) and turnover-worthy plays percentage (2.4) from a 2021 campaign where he graded top-10 in college football according to Pro Football Focus. The issue for Wake Forest is that Hartman had his lowest grade of last season against Clemson (64.7) despite throwing for over 300 yards (312) with one touchdown and one interception. He had by far his worst grade as a runner in that 48-27 defeat (42.6). Hartman has to make plays and smart decisions to keep things from spiraling on his team’s end.

Here are my top performing players from Week 2! 🏈

2. WR AT Perry - Perry was a preseason All-American but ranks ninth on Wake Forest this season in passing game grade (61.3 PFF grade; min. 50 snaps), with three drops in 26 targets. He accounted for nearly 1,300 receiving yards last year, including 113 against the Tigers. Clemson’s makeshift-yet-talented secondary, looking to field more depth this week after health issues versus Louisiana Tech, will know where No. 9 is – it’s just a matter of if they can contain him this time around.

It's the subtleties and attention to detail that makes Rondell Bothroyd so good.

All in a span of about 2-3 seconds, he's reading the play, reading Salter, sidestepping the pulling guard, making a tackle. pic.twitter.com/vJxTaP4csL

Analysis: There were game odds before last week that had Clemson firmly as a double-digit favorite, but the lines after the weekend started right around a touchdown. The Tigers have won by an average of 28 points a game in Winston-Salem under Dabo Swinney and easily covered the 3.5-point spread in last year’s 48-27 win. The Deacs did cover the 33.5-point number to start the pandemic-affected 2020 season but were never really in it. After Cade Klubnik’s late TD drive put Clemson over the top spread-wise in the opener, the Tigers have not come close to beating the spread in the last two games.

This figures to be a game where both teams go deep into the playbook for what they think they can execute, and with both defenses having their vulnerable moments so far, there could be some points on the board without a sluggishness from a noon start. The question will be if the trends continue in Clemson’s easy wins at Wake or if Hartman has a performance that can keep the Deacs in it. I wouldn’t be surprised to see Wake Forest hang around but the Tigers add a late score to make things more comfortable.

1. NC State - Dave Doeren’s Wolfpack are very likely coming to Death Valley as a 4-0 team with UConn on the schedule this week, and they’ve been powered by a top-15 defense and a No. 1-ranked special teams group while the offense has struggled with efficiency (97th per ESPN).

2. Florida State - All eyes are on QB after Jordan Travis went down in the win over Louisville, but the Seminoles have a top-10 offense according to ESPN’s metrics and own a win over two Power 5 teams away from home in the 3-0 start.

3. Wake Forest - Hartman’s injury absence was only for one game and he’s thrown for 300 yards and up in two starts this season to keep the Deacs as a division contender.

4. Notre Dame - Notre Dame owns the highest SP+ ranking of the remaining teams (18) thanks to its recent history and recruiting, but the home loss to Marshall and some struggles the next week versus Cal (plus being 91st in offensive efficiency per ESPN’s FPI through three games) have knocked the shine off new coach Marcus Freeman’s effort.

5. Syracuse - In a vacuum, Syracuse could arguably be top-3 on this list with a couple of Power 5 wins – one in divisional play – but we’ll know more about the Orange this week hosting Virginia and then NC State in mid-October.

6. Miami - Here’s a complete list of touchdowns Miami has scored versus Power 5 teams this year: (...metrics would tell you it’s a top-25 offense efficiency-wise though that'll be tested the further we get into the season).

7. Louisville - The Cards are in a hole at 0-2 in divisional action already but do own a solid win at UCF – meanwhile Malik Cunningham and the Louisville offense are operating below preseason expectations (78th on ESPN).

8. South Carolina - ESPN’s FPI metrics are not kind to South Carolina’s 1-2 start with a No. 92 offense and No. 95 defense after facing and failing tests against Arkansas and Georgia.