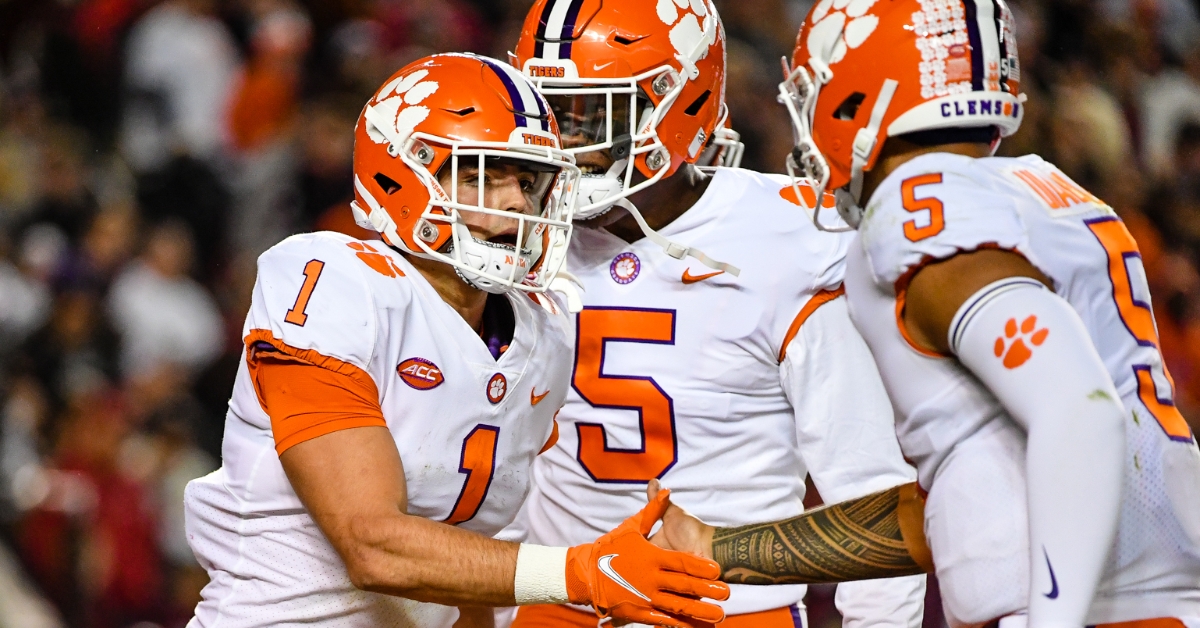 Clemson's running game and defense carried the day in a 30-0 win in Columbia last year.

Fans on both sides of the Palmetto State rivalry might just wonder what version of their team will show Saturday in Death Valley (noon/ABC).

Clemson has put together two of its better defensive efforts of the season recently, with some spurts of offense mixed in that were reminiscent of a season’s inconsistency.

South Carolina is coming off one of the more shocking one-game turnarounds this season, from a 38-6 loss at Florida one week to a 63-38 win over No. 5 Tennessee at home the next.

Taking those recent results into account, here’s the picture for the whole season:

Here’s how out of the ordinary last week’s South Carolina offensive performance was against Tennessee:

Going into the week, the Gamecocks were ranked 92nd in total offense and 58th in SP+ efficiency, jumping up 23 spots this week there with the effort.

What also stands out from South Carolina’s metrics is a unanimous No. 1 ranking in special teams. Their strongest marks on FEI come with punt return efficiency (2), field goal efficiency (4) and punt efficiency (5). Kicker Mitch Jeter has hit two 50+ yard field goals, but both came in the opener and he hasn’t attempted a field goal of more than 40 yards since.

Clemson counters with a high of a top-15-rated defense by two outlets, an offense around the top-30 and a special teams group in the same range.

A year ago -- and a markedly different Gamecocks QB situation, Clemson limited the instate rival to 206 yards total and 12 first downs (just four third down conversions) in a 30-0 win. On the other side of things, the Tigers bullied South Carolina with 265 rushing yards at 6.2 yards per carry with three scores. The Tigers could very well have success running the ball again in this installment too, with South Carolina 110th in rushing defense and 127th in success rate against the run.

South Carolina fans saw the Rattler they were expecting this season last week as he dropped in pinpoint throws all over the yard. That has not been the case consistently, however, where he’s performed almost 16 points lower than his 2021 Pro Football Focus grade -- when he was benched at Oklahoma (86.1 there; 70.4 this year; as high as 92.5 at Oklahoma in 2020). Even before last week, Rattler’s play had picked up – going from four grades in the first six games at 56.9 or lower (and as low as 34.4) to three grades at 80.1 or better in the last five games.

Rattler has been under pressure 33.9% of his dropbacks with a 34.8 completion rate and five touchdowns to six interceptions in that situation (33.4 grade; DJ Uiagalelei has faced pressure on 25.7% of his dropbacks with a 37.9% completion rate, four TDs to 1 INT and a 47.3 grade there). When he has time, however, Rattler can pick apart a defense, with a 78.9% completion rate, 2,000 of his 2,431 passing yards and nine touchdowns to three picks. Rattler was under pressure for only nine of his 43 dropbacks against Tennessee, and while blitzed by the Vols 41.9% of the time, he connected on 76.5% of those throws with 12.8 yards per pass with three touchdown passes.

Analysis: The metrics tend to say Clemson is being given a little too much credit here, and there’s a couple above that have the game decided in the single digits. With South Carolina rated as a top-35 SP+ team, Clemson is 2-0 covering the spread against teams in that tier (Florida State and Louisville) and it’s 3-2 ATS when you extend that out to the current top-50 SP+ teams (covered against NC State and not at Notre Dame and Wake Forest). I’d feel a little more confident if the line was a point lower, but Clemson’s ability to pressure Rattler should see a game more like the first 10 for the Gamecocks – it’s just a matter of if the Tigers can get the ground game going again like 2021. Pick: Clemson -14.5. (6-5 on ATS picks; 9-2 on O/U this year – game score picks in TigerNet’s weekly predictions story).

What’s left after this weekend