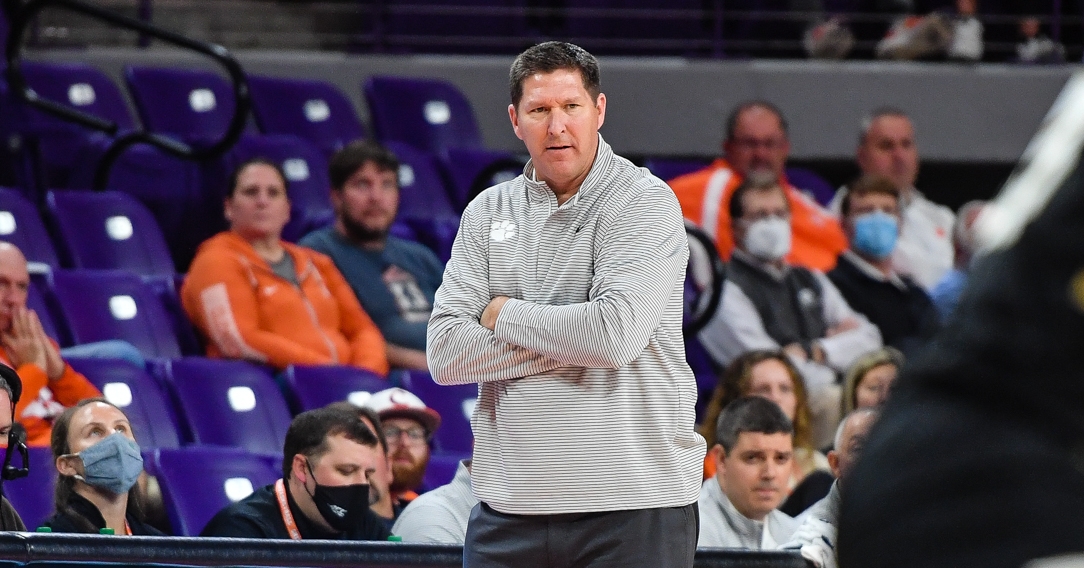 It was another tough second half for Brad Brownell's Tigers in Charleston.

Clemson lost its second double-digit, second-half lead in as many games as it fell to West Virginia (4-1) in the third-place game of the Charleston Classic Sunday, 66-59.

Clemson (4-2) committed a season-high 20 turnovers against a tough Mountaineers defense, and the late-game scenario left a lot to be desired once again for the Tigers.

Down one at the half, Clemson surged out of the break with tough defense and shots beyond the arc falling.

Back-to-back treys from Al-Amir Dawes and Nick Honor pushed a Tigers lead out to 48-39 with five minutes into the second session. Dawes led the Tigers with 18 points Sunday, while Honor contributed 10.

Things got sloppy from there with turnovers and missed shots aplenty as Clemson largely maintained a couple-score lead.

With Clemson sophomore forward PJ Hall subbed out after looking exhausted midway through the half, a Naz Bohannon offensive foul preceded a Mountaineers layup to cut that Clemson lead to 56-54 with just under five to go. WVU’s Sean McNeil tied up the game about a minute later and free throws on their next possession pushed the run to 8-0 and a 58-56 lead. With Hall back on the court, a third Clemson shot clock violation of the half followed on the ensuing possession. After a second offensive rebound on the next time down court, West Virginia pushed its lead to 60-56.

"We had a hard time breaking the press -- understanding when to attack versus when to try to get back into something," Clemson coach Brad Brownell said. "It really really threw our rhythm off the last eight minutes of the game. And that was hard for us. McNeil just made several big-time plays and was the difference in the game."

Clemson broke the 10-0 run with Bohannon sinking one of two free throws with under a minute left. A layup from Malik Curry brought the West Virginia lead to five and Bohannon returned to the line to sink a pair and cut the lead back to three.

Out of a timeout with 17 seconds left, Clemson was called for a technical foul with six players on the court to defend the out-of-bounds play. The Mountaineers hit both free throws to go up five with the ball, where they ran another 10 seconds off the clock before getting fouled.

"I apologize to our players for our putting six guys on the court," Brownell said. "We were putting Chase Hunter into the game and I think we forget to get PJ and no one saw that PJ was still in there down there. That's really disappointing. We had it to three...and the coaching staff makes a huge error. That's something that can't happen."

The nightmare half felt all too familiar for Clemson, which led by as much as 14 in the second half of a 68-65 loss to No. 22 St. Bonaventure on Friday in Charleston.

Clemson shot 55% percent from the field but knocked down only 10-of-18 free throw attempts, while WVU was 9-of-11 there and 42.6% shooting from the field.

Brownell said Hall (10 points/five rebounds) and Hunter Tyson (nine points/six rebounds) were not feeling well during the game. Alex Hemenway missed a second-straight outing due to illness, as was listed pregame.

"He and Hunter were both not feeling well during the Bonnies game and I thought they were able to play better. Today they just didn't have it," Brownell said. "It was hard. The kids were doing everything they could. Hunter couldn't make a shot. You could see his legs -- he didn't have it. PJ was asking to come out all the time. It's just what it is. It's basketball. We had a chance to win the game. It wasn't because guys were sick. We didn't do the things we needed to do to finish the game."

The first half went back-and-forth after a strong Clemson start.

The backourt duo of Dawes and Honor scored Clemson’s first 17 points en route to an 8-point edge and a Tyson field goal meant a 7-for-8 shooting start and 19-12 lead six minutes in.

The Mountaineers’ tough defense eventually tallied some stops and West Virginia took the lead in the midst of an over eight-minute Clemson field goal drought.

They wouldn’t pull any further away than three points in the first 20 minutes, however, and a tough Hall bucket at the buzzer made it 35-34 WVU at the half.

In the first half, Clemson shot 57% from the field and committed 10 turnovers, while West Virginia shot 45% with nine turnovers and a 5-offensive rebound advantage (6-1).

The Tigers return to action at 2 p.m. on Friday at home against Charleston Southern (ACCNX).

Clemson-WVU box
Get the latest Clemson gear right here!
Comment on this story