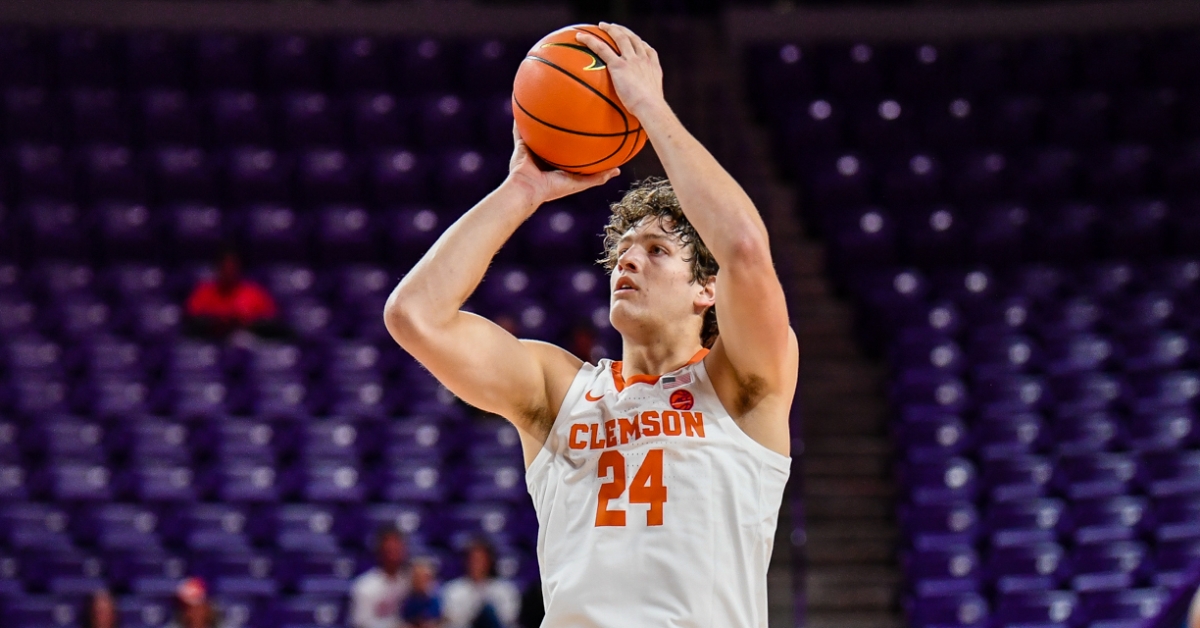 Clemson men’s basketball won a second-straight ACC road game thanks to a hot-shooting second half in a 70-65 win at NC State.

The game settled into a back-and-forth affair in the second half with neither side holding more than a 5-point lead deep into the action.

Clemson sought to break through that barrier in a run of nine consecutive made shots for a 57-53 advantage with just over five to go. Clemson held a 20% shooting edge (51-31) with five minutes left as three free throws from Alex Hemenway extended the Clemson edge to 60-53.

Clemson entered the game rated No. 25 nationally with KenPom's offensive efficiency metric. The Tigers made 58% of their second-half shot attempts.

A Chase Hunter jumper moved the lead to nine points with three and a half minutes left. NC State cut the edge late and hit a 3-pointer with 0.9 on the clock to make it a 3-point game. Nick Honor sank two free throws then to ice it.

PJ Hall led the Tigers with 20 points on 10-of-16 shooting, aiding a 44-20 advantage for Clemson with points in the paint.

"They (NC State) switch and take things away and make it hard to play from the perimeter so we made it a point to talk to our guys to play in the paint," Brownell said postgame. "That was kinda the phrase for our offense today. Be strong with the ball. Play in the paint. I thought PJ was fantastic. It's incredibly helpful to be able to throw it to a big guy who can catch. His hands are so good. He catches it in difficult spaces. We told our guys that if he's anywhere 12-feet and in to throw him the ball. I thought he was fantastic. Just a fantastic team win. So many guys doing a lot of little things...This is is kinda how our team has to play.

"Our bench didn't play quite as well against Virginia the second time (a 75-65 loss Tuesday) but played great the first time and played very well today. Just a fantastic team win and you have to do that on the road especially."

The win was a first for the Tigers in Raleigh since the 2014-15 season.

Clemson led by as much as eight points in a frenetic first half.

NC State went on a 9-0 run to start the game for what would be its biggest advantage of the half, but the Tigers worked their way back, taking their first lead with under seven minutes left in the session while on a 10-0 run. It wasn’t until minutes later that NC State sank its first 2-point field goal of the game after a 4-for-16 shooting start.

Brownell’s Tigers built the advantage out 28-20 with under four to go. At the buzzer, NC State’s Cam Hayes gave the Wolfpack momentum into the break with a trey to cut the Clemson lead to two. Al-Amir Dawes led all scorers with 10 points on 4-of-6 shooting after 20 minutes.

Clemson returns to action at Notre Dame on Wednesday in a 7 p.m. RSN broadcast start.