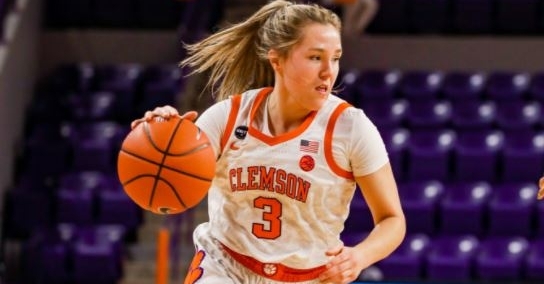 Clemson is 6-10 on the seasoni

Clemson, S.C. - The Tigers fell 69-60 in a hard-fought game against the Miami Hurricanes in Littlejohn Coliseum. Clemson falls to 6-10 on the season and 0-5 in the ACC. Delicia Washington finished with a season high 24 points for the Tigers. The Macclenny, Florida native shot a perfect 3-3 from behind the arc and 10-14 from the floor.

Amari Robinson finished with nine points and a team-high six rebounds, while Hannah Hank turned in a game-high four steals. Ten Tigers saw action in the game, with nine players scoring at least one basket.

The teams played a tight first half, with Miami holding a 32-29 advantage. Daisha Bradford went 4-5 on the floor at the end of the half and led the Tigers with eight points.

The Hurricanes went on a 12-4 run to begin the third quarter. A layup by Karla Erjavec with two minutes to go in the 4th secured Miami’s win against the Tigers. Washington went on a pair of 5-0 runs herself during the second half and led the Tigers with 19 points during the half.

Lola Pendande led Miami with 16 points on 7-8 shooting with four rebounds. Maeva Djaldi-Tabdi finished with 13 and five rebounds for the Hurricanes.

Clemson will hit the road to face Virginia Tech in Blacksburg on Sunday, Jan. 16th for a 6:00 p.m. tip-off. That game can be watched live on the ACC Network.