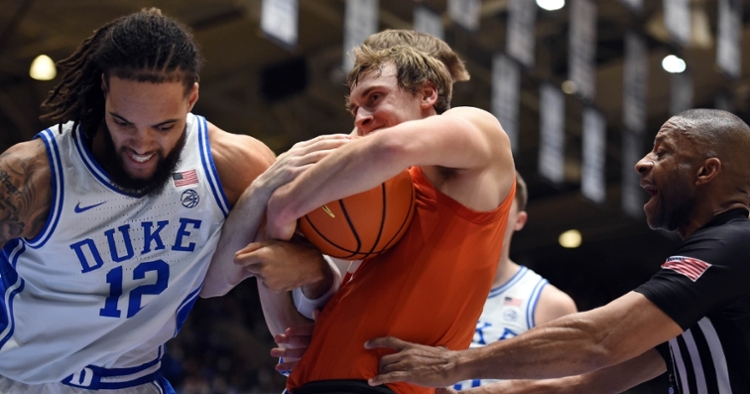 Clemson took No. 9-ranked Duke to the wire, but the Blue Devils seized a late lead and hung on for a 71-69 win Tuesday in Cameron Indoor Stadium.

After a 36-all deadlock at halftime, Duke, which has been the ACC’s lone ranked team since week three (AP), controlled the action out of the break on the strength of freshman forward Paolo Banchero.

Banchero had to sit with early foul trouble and only scored five points in the first half, but he came out of the break with five consecutive points and finished with a game-high 19.

Clemson kept pace, however. After Duke stretched its lead out to seven points for a second time, a Hunter Tyson 3-pointer and a Chase Hunter breakaway dunk brought the edge down back to two with 7:26 left. A Nick Honor 3-pointer minutes later gave Clemson a 61-60 lead.

The action went back-and-forth from there, but a Banchero jumper gave Duke a two-possession lead with a minute and a half to go and Clemson’s next possession came up empty on a PJ Hall shot. After committing a foul on the rebound, Tyson recovered by beating Duke down the floor with 37 seconds left for a dunk to make it a one-score game again.

Banchero struck again in the game’s final moments with a bucket off the glass for a four-point edge that Clemson eventually answered after a missed 3-pointer with a layup with under two seconds left. Out of a timeout, Duke was able to run off the remainder of the clock.

"I think our guys played incredibly hard. We really blocked out," Clemson head coach Brad Brownell said. "I thought we were physical defensively. We didn't shy away from being aggressive offensively and playing in the paint. Doing the things we needed to do as far as throwing it in and driving it in. I thought our team played almost as well as we could play."

"We've been here a lot of times where you're on the ropes and it's seven or eight or whatever it is and you're one or two possessions from getting blown out...I thought our guys really hung in there. Got a couple stops. A couple transition baskets to cut it to a one-possession game. We did all we could do. We put game-pressure on Duke down the stretch and give their kids credit...They made some plays down the stretch and won the game. That's what good teams do. You put game-pressure on them and they handle it. They played like a top-10 team tonight."

Clemson held the lead for a significant portion of the first half.

Duke committed nine turnovers in the first 20 minutes that Clemson scored 12 points off of. The Blue Devils threatened to take some momentum late in the first half on a 6-0 run that gave them the lead – capped by a Wendell Moore Jr. breakaway dunk that prompted a Clemson timeout. That was Duke’s last field goal for nearly three minutes into the break, however, as it kept pace from the free throw line (8-for-10).

Hall was a steady force with nine points, five rebounds and three assists in a first half that he capped by sinking a game-tying 3-pointer. Hall finished with 14 points and 10 rebounds to lead Clemson.

Clemson had its first (and only) free throw attempt of the game with nearly eight minutes gone in the second half, down 55-50.

"Ah, yes," Brownell said when asked if he was surprised by that stat, adding after a notable pause, "That's happened here before too."

The Tigers finished shooting 41% from the field and 42% from beyond the arc, while Duke hit 48% of its shots and 50% from three. The Blue Devils committed just three turnovers in the second half, matching their second-half free throw attempts (all makes).

Clemson returns to action on Feb. 2 at home versus Florida State (7 p.m.).