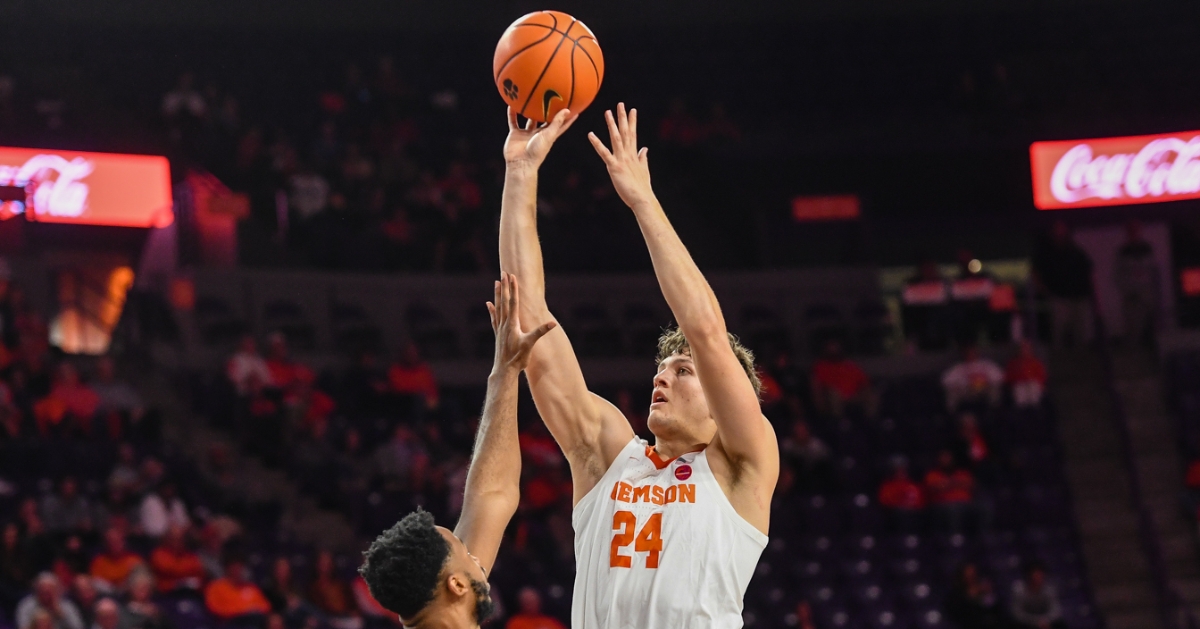 Hall put together a big game, but the Tigers couldn't close out the win.

The No. 22-ranked St. Bonaventure men’s basketball team took advantage of a lengthy Clemson second-half offensive drought to come back from a double-digit deficit and give the Tigers their first loss of the season Friday, 68-65.

In front of a largely partisan St. Bonaventure (4-0) crowd in Charleston, Clemson (4-1) held a double-digit advantage for much of the game until the hot shooting that had carried the Tigers for much of their time in Charleston to that point -- went ice cold, particularly from beyond the perimeter.

A contested jumper from PJ Hall pushed Clemson’s edge back to 11 points with 11 to go, but the Bonnies clawed back while trey-after-trey clanked on the Tigers’ end -- a 17-2 St. Bonaventure run giving it the lead for the first time since the first minute of the game, 55-53, with seven minutes to go. Bonnies guard Jaren Holmes hit a 3-pointer to push that edge to five points, but Clemson guard David Collins broke a lengthy scoreless run with a 3-pointer that finally went through.

Back-and-forth action marked the next few minutes of one-possession-score basketball. Down one with under 20 seconds left, a 3-pointer from senior forward Hunter Tyson was off the mark -- and down three after free throws, a late tying attempt from Nick Honor was blocked to clinch the Bonnies victory.

"Obviously disapppointing loss, I thought we played well for a good part of the game. We had some breakdowns in the second half of the game and some of that is the way they play," Clemson coach Brad Brownell said. "They run some really intricate things. We got exposed for not being prepared with practice and we messed up a couple switches and once they started to make a couple -- it was hard. That's a really good team. that's a well-oiled machine and you can tell they've been together a couple years the way they execute their stuff so late into the clock. That's the difference between them and most of the other teams you play. They execute their stuff late in the clock, which makes it really hard.

"I'm proud of our guys. Our guys came in with great confidence and we're a team that shoots a lot of 3s and we played well in the first half and made a bunch, and then in the second half, we missed a bunch of open ones. We're not good enough in some other things right now to balance all that out. I thought we had several guys play well. PJ was excellent. But this one hurts because the way we controlled the game for 28-30 minutes of the game probably and then they out-executed us down the stretch and beat us."

Hall led the Tigers with 22 points on 8-of-15 shooting and Collins scored 14. St. Bonaventure knocked down 10-of-12 second-half 3-pointers and made 59% of their shots in the session overall, also hitting all six attempts from the free-throw line.

Clemson held a 10-point edge at halftime after leading by as much as 15 in the session.

The Tigers started 4-for-4 from the field for an 11-2 edge that forced a Bonnies timeout three minutes in. It took a while for St. Bonaventure to warm up, however, going 1-of-12 on field goals out of the gate and a David Collins dunk pushed the Clemson lead to 18-6 with under 12 to go in the first half.

Picking from a 19-point effort in Clemson’s Charleston Classic opener, Honor knocked down his first two shots to extend his 100% percent shooting in Charleston (9-for-9) until a late first-session miss. Honor finished with 12 points on 5-of-8 shooting.

A Hall layup pushed Clemson’s lead to 36-21, but the Bonnies connected on a couple field goals to close the first half. They wrapped the first 20 minutes shooting 31% from the field and 33% on treys, against Clemson’s 48% shooting overall and 44% on 3-pointers.

"That was disappointing," Brownell said of the lead shrinking going into the half. "We tried to take PJ out just for the last minute or so for fouls...That (the late baskets) probably gave them a little juice. But we came out and competed in the second half initially. We withstood their first push, but then we couldn't execute enough down the stretch in a really tight, tough ballgame -- we didn't make enough plays. We got a little exposed. It's hard for us to get in the lane off some drives sometimes and score and maybe get fouled.

"We don't have as many big-bodied drivers as some teams and that probably hurts us occasionally. We didn't get in the bonus."

Clemson will play West Virginia at 5 p.m. Sunday on ESPN2 to round out the tournament in the third-place game.