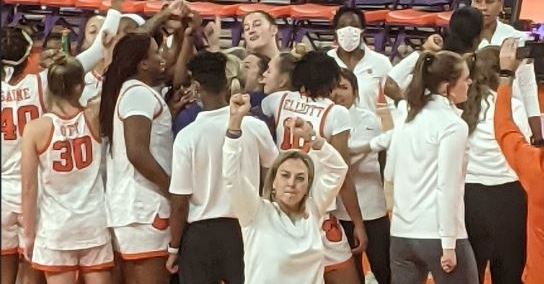 Tigers hand Penn State their first loss of the season

Clemson, S.C. – Gabby Elliott and Delicia Washington combined for 34 points to help the Tigers capture a hard-fought win over Penn State, 67-64, on Sunday afternoon in Littlejohn Coliseum. With the victory, Clemson improves to 2-2 and hands Penn State (3-1) its first loss of the 2021-22 season.

Elliott exploded for a season-high 19 points and eight rebounds while picking up three steals and one block. Washington finished with a double-double adding 15 points, 12 rebounds, six assists and two steals.

Kiara Lewis went 2-for-5 from 3-point range to contribute to her 11 points, while freshman Eno Inyang put up 10 points and nine rebounds.

As a team, Clemson shot 37.5 percent from the floor and 27 percent from behind the arc. The Tigers held a 21-2 advantage on second-chance points after grabbing 14 offensive rebounds. Clemson was also able to score 34 points in the paint and got 18 points from the bench.

Penn State held the advantage for the majority of the first half, as Clemson maintained a lead of 12-11 for only 44 seconds in the first quarter. At the end of the first frame, the Lady Lions had a six-point lead over the Tigers, 18-12.

Penn State extended its lead in the second quarter to as much as 10 points before Clemson was able to narrow the margin to only five, 38-33, following an 11 point first-half performance from Elliott. The Detroit, Mich. native made five of her 11 shots taken, including a three-pointer, while grabbing five rebounds before heading to the locker room.

Clemson came up with a huge third quarter after shooting 42 percent to tie the game at 52 with the Lady Lions. Elliott and Washington spurred the comeback, each scoring six points to lead the Tigers. Washington was a perfect 3-for-3, while Elliott was 2-for-4 from the floor.

It was a back-and-forth battle in the fourth, with neither team taking more than a four-point lead. In the last five minutes of play, the Clemson defense clamped down as the Tigers shut down the Lady Lions, allowing only five points to be scored and no field goals to be made in the final 3:43. With the defense holding firm, Clemson’s offense was able to capitalize on three fast breaks and score eight points in those last five minutes.

Marisa Makenna guided the Lady Lions with 17 first-half points on 7-of-14 shooting from the floor and was the only Penn State player to hit double-digits (29).

Clemson will return to action on Wednesday, Nov. 28, playing host to North Florida at 1 p.m. in Littlejohn Coliseum on ACCNX.