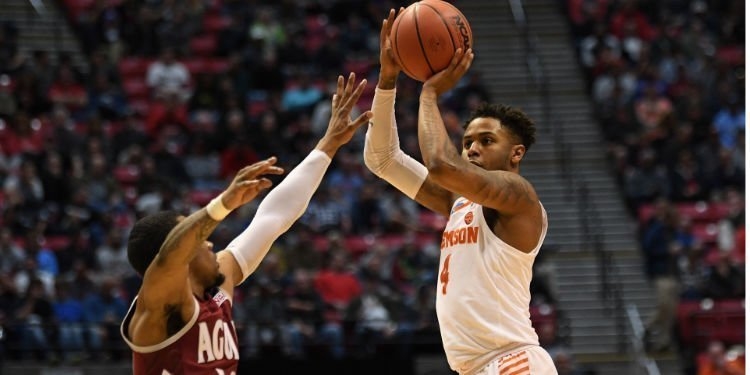 Brad Brownell's Tigers led by as much as 15 points in the second half but Akron cut the lead to four with under three to go with an 8-2 run. Clemson extended the lead to as much as nine points in the final seconds then and Akron hit a 3-pointer with a second left to make the score closer.

A quartet of Tigers scored in double-figures with Shelton Mitchell (22), Marcquise Reed (16), Elijah Thomas (15) and Aamir Simms (12). Thomas added a game-best 12 rebounds for the double-double.

Clemson will play Georgia (3-1) on Tuesday at 1:30 p.m. (airing on WatchStadium's Facebook Live). The winner of that game moves on to a primetime championship matchup at 7:30 p.m. on Wednesday.

Aamir Simms secures his fourth double-digit scoring game in as many tries this season to give Clemson its largest lead of the game [37-26]. The sophomore has already eclipsed his 2017-18 total of three games with 10 or more points.#ClemsonGRIT pic.twitter.com/yurTdhMv2h

Shelton Mithcell registers his fourth double-digit scoring game in as many tries this season, scoring his 10th point in just 16 minutes of action. That's also his 51st career double-digit scoring performance - his 49th as a Tiger.#ClemsonGRIT pic.twitter.com/cox2XdoYQ3

Tigers are movin' on to face the winner of Georgia-Illinois State tomorrow at 1:30 p.m.#ClemsonGRIT pic.twitter.com/WYTPctoADJ

Clemson vs Akron Box Score
Get your Trevor Lawrence and Travis Etienne Jaguars gear right here!
Comment on this story