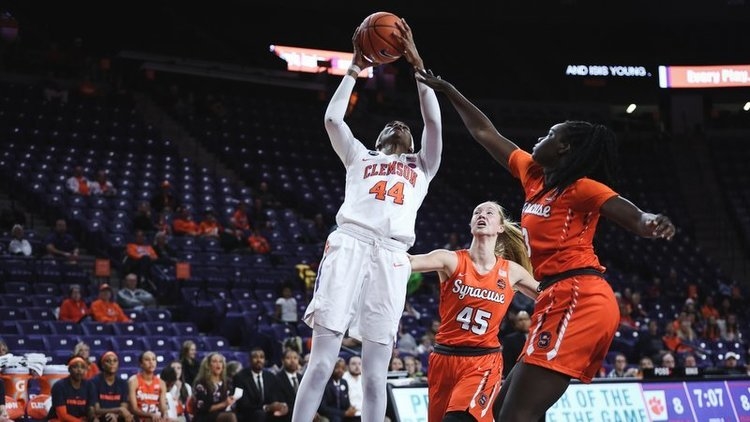 CHESTNUT HILL, Mass. — Despite a quick two-day turnaround, the Clemson Tigers (17-9, 8-5) showed zero signs of fatigue on Saturday, posting a 91-58 victory over the Boston College Eagles (14-12, 3-10) at Conte Forum. Clemson dominated Boston College in every aspect of the game and eclipsed the 90-point mark for the first time in almost 10 years.

“We did a great job of setting the tone with our defense, and that’s what we talked about with this quick turnaround,” said head coach Amanda Butler. “Our recent play is a testament to what happens when we play to our strengths and stay true to who we are.”

The Tigers shot 59 percent from the field and held the Eagles to 30 percent shooting to put on one of their best all-around performances of the season. For the fourth straight game, Clemson shot better than 50 percent from beyond the arc, going 9-of-12 on the afternoon. The victory was a team effort as 10 different Clemson players recorded a basket the contest.

The Clemson bench accounted for 38 of the team’s total points led by senior Aliyah Collier, who paced all Tigers with 18 points on the afternoon (3-of-3 from beyond the arc). Down low, forward Kobi Thornton was dominant for the Tigers in the first half, as 11 of her 17 points and all 11 of her rebounds came prior to halftime.

Clemson outscored Boston College 29-14 in the opening quarter, a frame that was punctuated by an off-balance buzzer-beater from Collier. Following a second quarter that saw Clemson take a commanding 53-23 lead into the intermission, the Tigers shot 52 percent from the floor in the second half to coast to victory.

The Tigers put on a bow on the win with a 26-point output in the fourth quarter thanks in part to a trio of 3-pointers from freshman Camreé Clegg. The guard finished the night with a career-high 12 points, shooting 4-of-5 from 3-point distance.

Clemson heads to Atlanta on Thursday to take on the Georgia Tech Yellow Jackets for the second time this season. Tipoff at McCamish is slated for 7 p.m. and the game will air on ACC Network Extra.

Game Notes: Clemson reached the 90-point mark for the first time since pinning 104 on Charleston Southern in 2009...The Tigers posted 53 points in the first against Boston College, marking the most points in a half since Nov. 14, 2010 (54 points in the second half)...Clemson’s 29 points are also the most points in a quarter since the inception of the quarter-era (2014-15)...Junior Kobi Thornton finished the night with 17 points and hauled in 11 rebounds for eighth double-double of the season (16th career)...At 8-5 in conference play, Clemson has its most ACC wins since 2002 (nine)...The road win at Boston College was the Tigers’ fifth ACC road victory of the year, matching the most since the 2000-01 season (five)...Five Tigers recorded double-figure outings for the first time in conference play this season…Clemson finished the night shooting 59.0 percent from the field, its highest shooting percentage since Dec. 14, 2002 (60.3 percent against Furman)...The Tigers shot 75 percent (9-of-12) from 3-point range, tying the program record for 3-point field goal percentage in a game, set back on March 24, 1995…Freshman Camreé Clegg set a new career-high with 12 points in the game, including a 4-of-5 showing from beyond the arc.