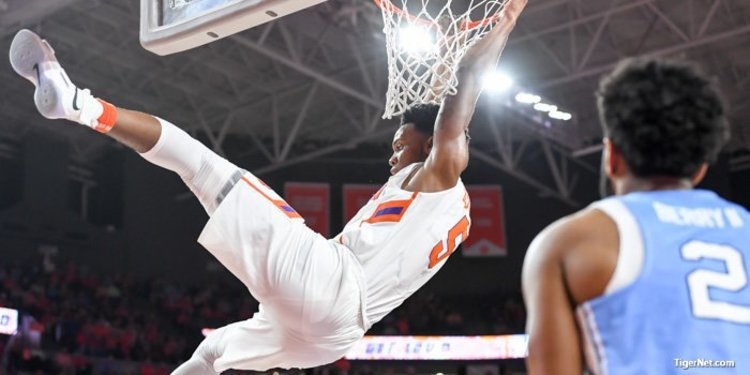 • Clemson is in search of a third straight win over Syracuse; the Tigers have won the only meetings each of the past two seasons, 2014-15 in Clemson and 2015-16 in Syracuse.

• The Tigers shot the ball well from three-point distance in each of the past two wins over the Orange; Clemson was 12-20 in the win two years ago and 8-17 last season in the Carrier Dome.

• Avry Holmes is shooting 53.8 percent from three-point range in ACC play, less than a percent off the school record set in 1986-87 by Michael Tait, who shot 54.5 with the line a foot closer than it is today.

• Jaron Blossomgame is one of five players among Clemson's top 10 in both scoring and rebounding over a career. Trevor Booker, Elden Campbell, Dale Davis and Horace Grant are the others to achieve the feat.

• Blossomgame posted 20 points last season at Syracuse, and a double-double (15 points, 12 rebounds) the previous year at home, both wins.

• Marcquise Reed is Clemson's top scorer off the bench at 9.5 points per game, and has reached double figures in three of Clemson's last five contests.