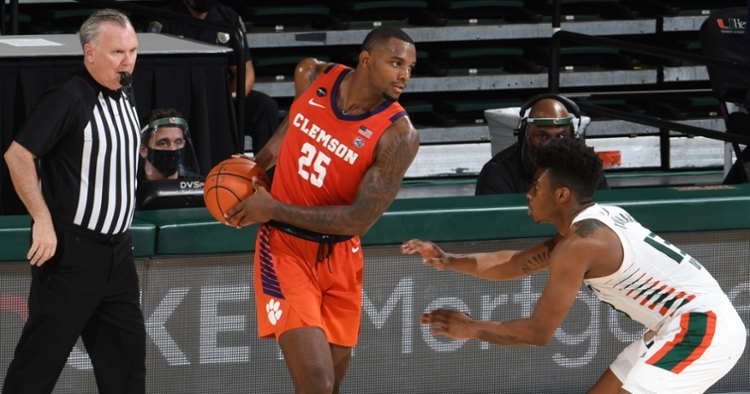 Simms has had a solid year (ACC photo)

GREENSBORO, N.C. (theACC.com) – Georgia Tech senior forward Moses Wright has been selected the Atlantic Coast Conference Player of the Year, highlighting the All-ACC Men’s Basketball Team and award winners for the 2020-21 season, as released Monday morning by the conference office.

The 2020-21 All-ACC Team was determined by a 75-member panel consisting of the league’s 15 head coaches and 60 members of the media.

Florida State guard Scottie Barnes received a double nod as ACC Freshman and Sixth Man of the Year, while Virginia Tech’s Mike Young was voted the ACC Coach of the Year.

A native of Raleigh, North Carolina, who came to Georgia Tech having played only one year of high school basketball, the 6-9 Wright enters this week’s New York Life ACC Tournament third in the conference in both points (18.0) and rebounds (8.1) per game. Wright keyed the surging Yellow Jackets to a 15-8 overall record and a fourth-place finish in the final ACC regular-season standings at 11-6. Wright is shooting 54.4% from the floor while playing 35.7 minutes per game.

Wright is the second Georgia Tech player to earn ACC Player of the Year honors and the first since Dennis Scott in 1990. Wright received 33 votes from this year’s panel, well ahead of runners-up Justin Champagnie of Pitt and Louisville’s Carlik Jones (13 votes each). Wright, who ranks sixth in the league in blocked shots with 38, also earned a spot on this year’s All-ACC Defensive Team.

Florida State’s Barnes helped the Seminoles to a second-place ACC finish while averaging 10.4 points and 4.3 rebounds, and ranking fifth among conference players in assists with 4.3 per game. Barnes, who averages 24.7 minutes played per contest, also ranks fourth among ACC players in assist/turnover ratio and is tied for sixth in steals per game.

Barnes received 53 votes for ACC Freshman of the Year. North Carolina’s Day’Ron Sharpe placed second with 10. The Sixth Man of the Year voting was a bit closer, with Barnes receiving 39 votes, followed by Sharpe with 24.

Virginia Tech’s Young received 26 votes for ACC Coach of the Year to edge Florida State’s Leonard Hamilton (24 votes) and Georgia Tech’s Josh Pastner (16 votes). In his second year with the Hokies, Young guided a team picked for an 11th-place finish in the preseason to a No. 3 ACC Tournament seed. It is only the second time the Hokies (15-5, 9-4 ACC) have been the No. 3 seed in the ACC Tournament (2007) and the first time they have been awarded a double bye since the tourney expanded to 15 teams in 2014. The No. 3 seed ties the highest Virginia Tech has ever earned in the ACC Tournament.

Young’s selection marks the third time the ACC Coach of the Year honoree has come from Virginia Tech and the first time since 2008 (Seth Greenberg).

Alvarado leads the ACC in steals with 66 in 23 games, helping Georgia Tech to a share of the team lead in that category. Duke’s Hurt leads the conference in scoring at 18.7 points, while pulling down 6.2 rebounds per game, after averaging 9.7 points and 3.8 rebounds last season.

Alvarado was the top vote-getter for the All-Defensive Team and was joined on the squad by NC State’s Manny Bates, Virginia’s Huff, Duke’s Jordan Goldwire and Georgia Tech’s Wright.

ACC FRESHMAN OF THE YEAR

COACH OF THE YEAR

SIXTH MAN OF THE YEAR