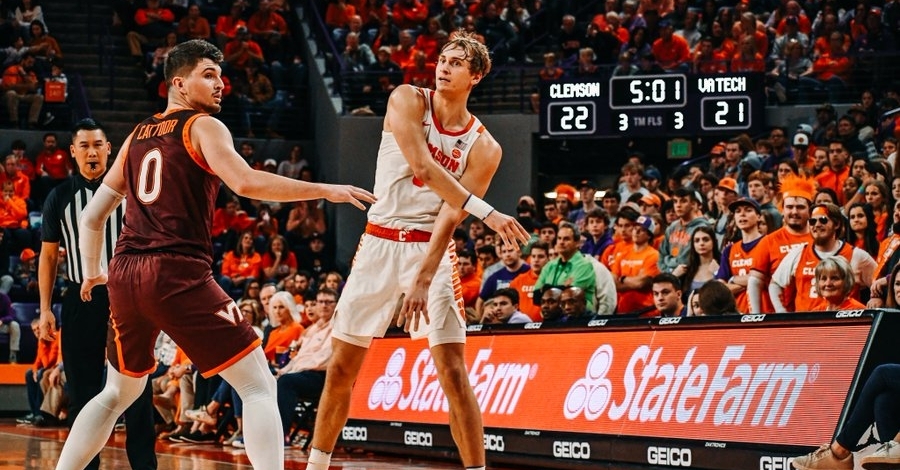 CLEMSON - Shots that went through the hoop with ease in No. 19 Clemson’s 7-0 ACC start were meeting the rim and rejection quite often for a healthy stretch of the Tigers’ home matchup with Virginia Tech Saturday.

The defense kept Clemson in it, however, and the offense came around enough down the stretch for the Tigers to maintain their sole spot atop the ACC standings with a 51-50 win.

After Clemson's 2-of-17 start on 3-pointers, Hunter Tyson’s trey from the top of the key with 10.8 seconds left gave the Tigers the game-winning lead.

“Both teams just defended like crazy,” Clemson coach Brad Brownell said. “Just competed. We both know each other so well. Just a ton of respect between the programs in how we do things. Their kids play really hard and I thought our kids played incredibly hard. I thought both teams -- it’s not easy to defend like that when you’re not scoring…It takes a lot of will and our guys had that today."

“In every huddle, (Tyson) was challenging our team and each other. We just had good spirit throughout the day. I’m really happy for him to make a huge shot like that.”

The Tigers (16-4, 8-1) completed their first series sweep of Virginia Tech and extended the school’s eighth-longest home winning streak to 14 games.

Clemson led by as much as six in the first half, but the shooting went cold down the stretch.

Virginia Tech’s Sean Pedulla gave the Hokies their first lead since the first bucket of the game with a 3-pointer with just under four minutes left in the first period.

The Hokies (11-8, 1-7) extended their edge to six points after an 8-0 run in the closing minutes of the first half. Around that Virginia Tech charge, Clemson went 2-for-13 shooting from the field and went scoreless for nearly four minutes until a PJ Hall free throw broke the run to make it a 5-point halftime deficit. The Tigers hit just two of nine 3-point attempts.

It was the Hokies’ turn to go cold out of the break and Clemson’s big men helped a comeback and get the packed Littlejohn Coliseum back into the action, with Hall and Ian Schieffelin scoring seven points in a row to tie things up at 33 with 16 to go.

The Hokies dropped to 1-for-10 shooting around that stretch but still held on to a 37-33 lead as Clemson’s turnover count went up to 14 with 12 minutes to go.

A Clemson run-out and Hall bucket tied things up at 37 just minutes later and Schieffelin added a block on the other end to charge up the Tiger crowd. Tyson’s ensuing jumper then rattled around the rim and bounced in for a 39-37 Clemson lead with 9:07 to go.

A Dillon Hunter layup extended an 8-0 Tigers run and forced a Hokies timeout with 8:33 left.

Hall extended that edge with a hoop-and-harm against former Tigers teammate Lynn Kidd, drawing his fourth foul, to go up five with 7:16 to go.

The Hokies mounted a mini-run to tie things back up at 44 and Clemson called a timeout.

Clemson had an opportunity to take back the lead but the freshman Dillon Hunter missed the front end of a 1-in-1, and that was answered by a Hunter Cattoor 3-pointer to give Hokies the edge with a little over two minutes left.

A Hall tough bucket from under the hoop made it a one-point game with under a minute to go. Virginia Tech’s Grant Basile hit 1-of-2 free throws with 21 seconds left and Clemson grabbed the rebound to draw a play up out of the timeout with 14 seconds to go.

That play was drawn up for Tyson, who shook his defender and sunk a 3-pointer to take a 51-50 lead with 10.8 seconds to go. After a timeout, the Hokies’ final shot attempt was off the mark and they weren’t able to get up another up in a mad scramble for the ball.

"That's tricky, the lineup Brad I guess has to play right now," Virginia Tech's Mike Young said. "And it was long. Hunter goes down there right away then he comes back. It was (a) good (play). He's (Tyson) got a really good shot-fake. Good draw-up from coach Brownell, putting the ball in the hands of a darn good player. Hunter Tyson is having a really good year."

Hall scored a game-high 20 points, while Tyson finished with 12.

"It just means a lot, coach Brownell going to me at that moment of the game," Tyson said of his go-ahead bucket. "I had just missed a couple and he stayed confident in me and he drew up the play for me and it worked out pretty well."

Asked if he had any doubt it was going in, Tyson said, "No," with a big smile.

"I woke up Sunday morning after beating Duke really feeling good and excited about our guys and then you get some bad news," Brownell said of finding out about Chase Hunter's injury. "It reminds you of how hard it is. It's just hard (to stay healthy). Twenty games is a lot of games and it's hard to stay healthy. There's going to be some injuries so your kids have to adjust and you have to adjust. If you're going to be really good, you've got to have a lot of good players. It comes down to players a lot of times.

"We're trying to figure it out minus-two guys a little bit. I don't know when those guys will be back. Obviously your margin is small."

Clemson entered the day as the ACC’s top team in the standings by one game over a quartet of Miami (play once at Clemson on Feb. 4), Virginia (play once at Virginia on Feb. 28), Wake Forest (split season series) and Pitt (Tigers won the only scheduled meeting at Pitt). In Saturday’s action, Virginia won at Wake Forest, while Miami lost at Duke and Pitt fell at home to Florida State.

The Tigers wrap their scheduled 9 p.m. tip-offs this season versus Georgia Tech at home on Tuesday (ACCN).

Clemson-VT box
Get the latest Clemson gear right here!
Comment on this story