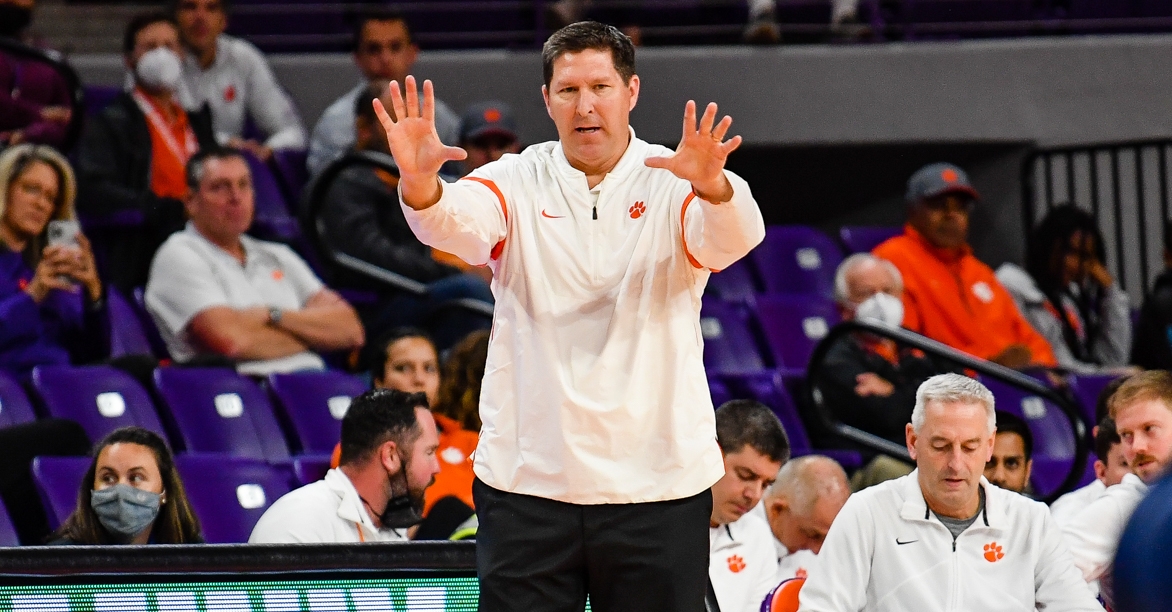 Brownell is now 4-0 at Clemson on his birthday.

CLEMSON – Brad Brownell’s basketball team made sure he had a happy 54th birthday with an 81-70 victory over USC Upstate Tuesday night in Littlejohn Coliseum.

Brownell has coached six games on his birthday throughout his career and is now 6-1 all-time, including 4-0 at Clemson, 1-1 at Wright State and 1-0 at UNC Wilmington.

Clemson improves to 2-1 overall while Upstate falls to 1-2. The game marks just the second all-time meeting between Clemson and USC Upstate - Clemson won handily 76-56 during the 2015-16 season and were led by Avry Holmes who finished 20, while Jaron Blossomgame and Ty Hudson added 11 each. Jordan Roper, now the Assistant Director of IPTAY Major Gifts - Block C Club, totaled nine points and six rebounds.

Four Clemson players scored in double figures, led by Chase Hunter’s 20 points on 7-of-12 shooting, including 4-of-6 from 3-point range. Alex Hemenway scored 18 on 7-of-9 shooting, including 4-of-6 from beyond the arc, while Brevin Galloway added 15 on 7-of-8 shooting from the free throw line. PJ Hall added 13 points, while Hunter Tyson scored eight points but grabbed a game-high 12 rebounds.

The Tigers led the entire way, including opening up a 13-point lead in the first half. PJ Hall’s dunk and then a 3-pointer by Alex Hemenway gave the Tigers a 24-11 lead at the 8:32 mark of the half. The Tigers kept a working margin of 8-12 points the rest of the half, led by Brevin Galloway, and led 42-31 at intermission.

The Tigers were unable to pull away from the Spartans through the first part of the second half, with Gainey and Justin Bailey’s hot shooting keeping Upstate close.

The Tigers were able to keep the Spartans at bay the rest of the way, never really pulling away or letting the Spartans have hope.

Clemson-Upstate box
Get the latest Clemson gear right here!
Comment on this story