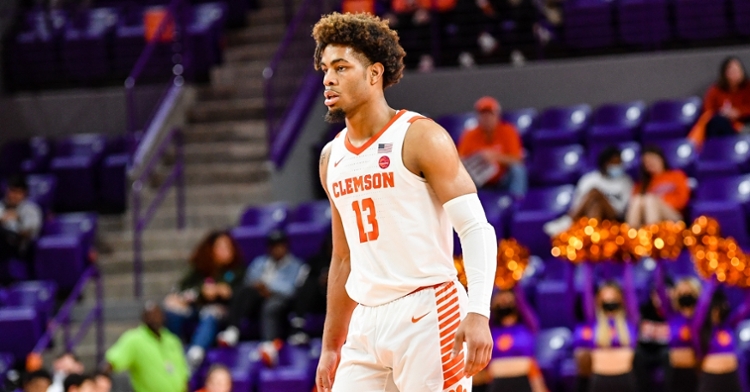 Collins scored 14 for the Tigers.

CLEMSON – Another late drought cost Clemson in a loss to Virginia Tuesday night.

Clemson had just four points off the bench and was outscored in the paint 34-22. There were 15 lead changes and the game was tied 15 times.

The Tigers hadn’t played since defeating Virginia 67-50 on December 22nd. A December 29th home game against Duke was postponed after the Blue Devils experienced COVID issues in their program. The Cavaliers had won 11-straight games in the series dating back to the 2012-13 season before that win by the Tigers.

Only once in program history has Clemson played an ACC opponent in consecutive games in the regular season. That happened in the program’s inaugural season in the ACC in 1953-54. Clemson played Wake Forest on Feb. 6, 1954, and Feb. 9, 1954. The Tigers lost both games of the home-and-home series.

Clemson entered the Virginia game on Tuesday night on a 12-game winning streak at home, the last six home games of last year and the first six games of this year. That 12-game home winning streak was the longest for the Clemson program since the Tigers had a 15-game home streak between March 1, 2017 and Feb. 18, 2018. Duke broke the streak with a 66-57 win over the Tigers on Feb. 18, 2018.

The game was back-and-forth over the first 10 minutes with several ties and five lead changes. The fifth lead change was a 3-pointer from Alex Hemenway and it gave the Tigers a 23-20 lead with just over nine minutes to play in the half. The Cavaliers came roaring back, however, and went on a 10-0 run over the next three minutes, taking a 30-23 lead with just over six minutes to go before intermission.

The Cavs extended the lead to eight at 34-26 on a jumper by Francisco Cavarro, but Hall followed with a 3-pointer to begin a 10-0 run that ended with a 3-pointer from Al-Amir Dawes. The Tigers held on and led by just one at 37-36 at intermission.

Neither team could open a lead over the first 14 minutes of the second half as the lead changed hands several more times, and when Hall hit a 3-pointer at the 8:08 mark of the second half, it gave the Tigers a 57-56 lead.

That was the last field goal for Clemson over the next six minutes as Virginia pushed the lead to 69-60 with just 2:20 to play. David Collins ended the drought from the field for the Tigers when he hit a jumper at the `1:18 mark, making it 69-62. Twenty seconds later, Nick Honor drained a 3-pointer and the Cavs held a 71-65 lead with just under a minute to play.

However, the Cavs were able to hit their free throws and hold on for the win.

Clemson returns to the court Saturday, traveling to Raleigh to take on NC State in a noon tip.