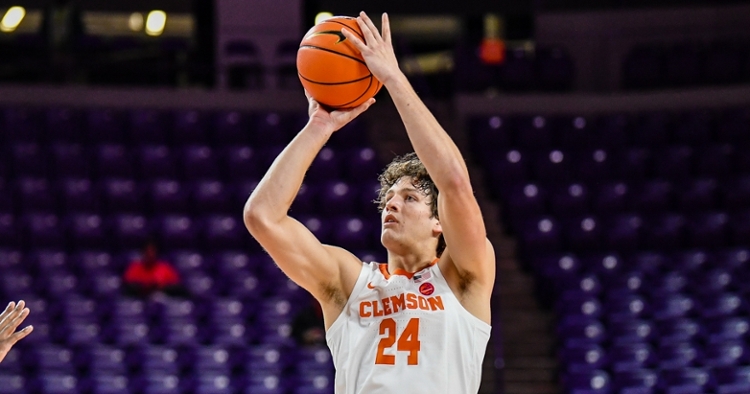 CLEMSON - Behind a career-best 22 points from sophomore forward PJ Hall, the Clemson Tigers (2-0) defeated the Wofford Terriers (1-1) inside a rowdy Littlejohn Coliseum on Friday night, 76-68. Hall scored 16 of his 22 points in the first half, breaking his career-high of 10 points, set last season against Mississippi State in the first week of the season.

Hall hit the biggest shot of the night with 2:18 left in the game, reaching to the sky with a left-hand hook shot to retake the lead 68-66. On the ensuing possession, the defense forced a shot clock violation. Hall was fouled on the other end of the court, splitting his free throws to give the Tigers a three-point lead with 1:30 left.

Al-Amir Dawes hit a three-pointer with 19 seconds left and zero on the shot clock to give Clemson a six-point lead and put the nail in the coffin on the Terriers. It seemed like the Wofford defender was going to steal the ball from Nick Honor, but Dawes stole the ball out of the hands of the Terrier and turned around and hit the game-sealing three.

Four Tigers scored in double figures on the night. Hall poured in his 22 points, while Hunter Tyson dropped 12 on 2-of-5 shooting from downtown. It’s the second consecutive game for Tyson scoring in double figures after scoring 14 on Tuesday night. Honor had (11 points) and Dawes (13 points) also reached double figures for the Tigers.

Clemson was outscored in the second half 37-35, but some clutch plays down the stretch of the second half by Honor was the difference-maker for Brad Brownell and his squad. Honor scored eight consecutive points for the Tigers after Wofford took the lead halfway through the second to retake the lead.

Clemson shot 21-of-29 from the free-throw line, much improved from the 56% against PC. The Tigers shot 47% from behind the arc and 43% from the floor in the win.

Clemson is now 12-1 all-time against Wofford. All 13 games have been played in Clemson. The Tigers have faced Wofford just twice in the last 10

seasons and have won 10 straight in the series, which dates back to the 1995-96 season.

"Great win for our guys," head coach Brad Brownell said. "Incredibly proud of our guys for how they played. We knew it was going to be a hard game and our guys played pretty well. Defensively we played well and were disruptive. I thought our guys adjusted and our staff did a good job of managing during the game. Good team win against a very good, tough minded team."

Brownell said he was proud of Hall's effort.

"PJ (Hall) was outstanding, I thought he played terrific," said Brownell. "He played better and played with some discipline. He came in as a guy that could make some threes, and we continue to work with him on it. Tonight he shot the ball well and we found him in some situations and I think he is effective when he is scoring in the low post and from outside."

The Tigers got out to a quick start on offense unlike in the opening game of the season. At the under 16 timeout, Clemson got seven of its 11 points from Hall who started the contest a perfect 3-of-3 from the field.

Hall continued his big first half heading into the under eight timeout in the first half, knocking down his second three-pointer of the night to give him 12 points in the first 12 minutes of the game. Clemson also went on a 7-0 run to increase the lead to 24-12 after Wofford had cut into the lead, 14-10.

Clemson took a 39-31 lead into the halftime locker room after shooting 50% from the floor in the first half. Hall scored 16 of his 17 points in the opening half, setting a new career-best in scoring in the first 20 minutes. The Tigers shot 12-of-13 from the free-throw line in the half and hit five of their 11 threes.

Wofford opened the second half with its foot on the pedal, going on an 8-0 run to cut the Clemson lead to three with 14 minutes remaining, 47-44. After Brownell called a timeout, the Terriers continued on their 15-2 run to take the lead into the under 12 media timeout, 52-49.

Honor came out of the under 12 timeout and scored eight straight points for the Tigers to give them back the lead, 57-55. Naz Bohannon also grabbed some big rebounds on the defensive boards to keep Wofford from any second-chance points.

Clemson and Wofford went back and forth for the remaining four minutes, trading fouls and points. The Terriers tied the game at 66 at the free throw line with 2:30 remaining, but Clemson responded with a Hall post up hook shot to retake the lead, 68-66.

Clemson will be back in action on Monday, hosting Bryant inside of Littlejohn Coliseum at 7 p.m. on RSN. The Tigers will head to the 2021 Shriners Children’s Charleston Classic next weekend with games against Temple, St. Bonaventure and Boise State for their early-season tournament.