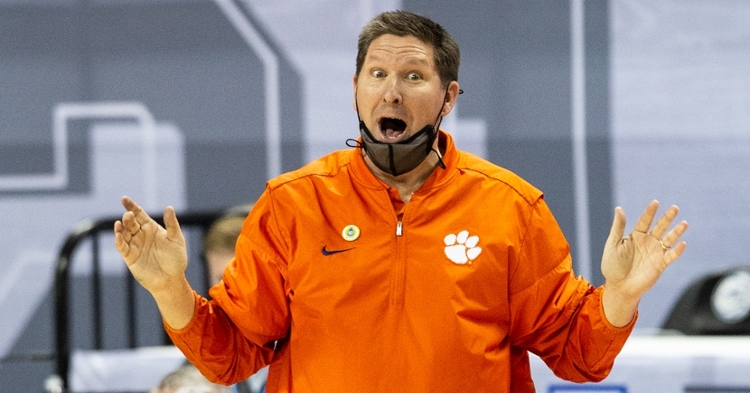 Brownell and the Tigers are living through Groundhog Day. (ACC photo).

Groundhog Day is a 1993 movie starring Bill Murray in which his character, a TV weatherman, becomes trapped in a time loop, forcing him to relive February 2nd repeatedly. At least until he gets the day right, which breaks the loop. Brad Brownell and the Clemson basketball team are living through Groundhog Day inside the NCAA Tournament in Indianapolis.

Teams that are participating in this week’s NCAA Tournament are secluded inside downtown Indianapolis hotels whenever they aren’t playing games at arenas such as Bankers Life Fieldhouse (like Clemson against Rutgers at 9:20 p.m. Friday on TBS) or practicing at the convention center. Clemson players and coaches undergo daily COVID-19 tests and are unable to even stroll down the street for a breath of fresh air unless they are walking to and from practice.

“It's different. You don't go outside, which is strange. We got here Monday afternoon and we were basically in quarantine for the better part of 28 hours,” Brownell told TigerNet Wednesday morning. “They brought meals to you and all of that stuff, but you don't really leave your room. We finally did get to practice last night. We had our two negative tests and got to practice last night, which was great. Everybody was just excited to get out of their rooms and see each other. It is different. It is hard for everybody, just being cooped up in a hotel up until Friday, and then we have the last game of the day which makes it even a little more challenging for everybody involved. It would be nice to get outside and move around a little bit but unfortunately, we haven't been able to do any of that. It is very regimented.”

The good news is now that the 28-hour quarantine is over, the team can be together for meetings and meals.

“Once you pass your two tests, you can meet and you can eat together. We have meeting rooms where we eat four to a table, so we are still spaced pretty well,” Brownell said. “We can meet and had a 30-minute film session this morning. We obviously walk everywhere together. You aren't going anywhere by yourself - you are going everywhere as a group. Players, coaches, we all kind of go together to practice, we all go together to film. We all go to test every day, and we tested again this morning. It's very regimented. We had our meetings and then the guys were back in their hotel rooms.

“We will have lunch and then practice around 2:30 and then walk together to the convention center for practice and then we will all walk back together and eat and then back to our rooms again. It's a little bit of Groundhog Day around here for the next several days. We appreciate what the NCAA is doing in keeping everybody safe. You see other teams but you kind of just walk by each other and that's about it. There is really no contact. They are trying to keep everybody away from each other and we are on separate floors.”

Brownell was asked how he has dealt with his team’s boredom, and he said there really isn’t anything he can do about it and that he hopes they are so excited to be out of the room that they play well Friday.

“There is nothing you can do about it. Guys are just doing what they do. I am sure some of them are playing video games and some of them are sleeping and some of them are watching TV or they are on their phones,” he said. “This is a little bit of the normal during the school year as well, because guys didn't do a lot during the school year. They could go out and get fresh air and come and go to the gym as they wanted or go and get food at a drive-thru. But the biggest concern as a coach is you are afraid the guys are going to leave their game in the hotel room because you are doing this for so many days in a row. It would be different if it was one or two days. But you get here on Monday and then you don't play until Friday, so you don't know how guys are going to play. Maybe they will play great because they are so excited to be out. But it's hard and it's different.”