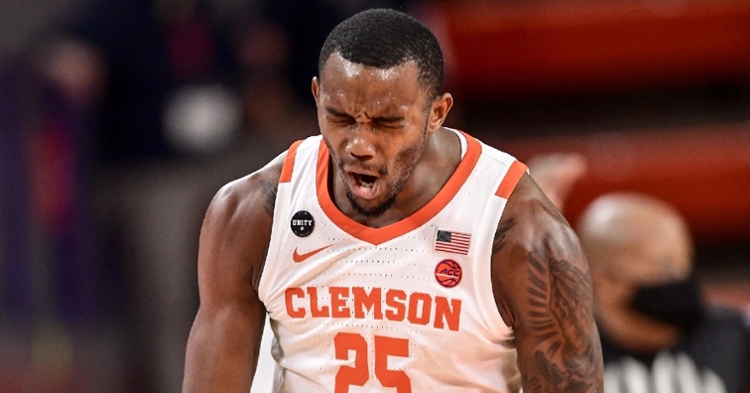 Aamir Simms is in a trio of seniors being honored Saturday. (ACC photo)

Three Clemson basketball seniors will be recognized today as part of senior day festivities inside of Littlejohn Coliseum when the Tigers conclude their regular season at noon against the Pitt Panthers (RSN). Forwards Aamir Simms and Jonathan Baehre, as well as point guard Clyde Trapp, will all be recognized for their contributions to the Clemson basketball program over the past four years.

Clemson enters the contest with Pitt boasting a 15-6 record and a 9-6 record in ACC play with the conference tournament set to tip-off next week in Greensboro, North Carolina.

When head coach Brad Brownell signed Simms and Trapp all the way back in the class of 2017, he signed two players who were both rated as top-10 recruits in their respective states. Simms, a four-star prospect out of Virginia, and Trapp, a three-star recruit hailing from South Carolina, both signed their letters of intent to play for the Tigers, and the rest as they say, is history.

Fast forward four years, and Simms and Trapp are fan favorites in the Clemson community. Simms' last-second shot to force overtime and the eventual game-winning shot in the extra period to end the streak against the Tar Heels in Chapel Hill will forever be one of the greatest plays by a player in a Clemson uniform. Oh, and don't forget Trapp's game-winning layup as time expired last year against Syracuse to keep the Tigers' NCAA Tournament chances alive.

Jonathan Baehre transferred to Clemson as a junior, and after sitting out a year due to NCAA eligibility rules, was set for a breakout first year with the Tigers. Unfortunately, that chance never came after back-to-back ACL tears last year within six months. Tiger fans everywhere will remember the resilience Baehre showed to get back on the court. The Wiesbaden, Germany native has appeared in all 21 games this season and is averaging over four points and three rebounds a game off the bench.

If you want to talk about putting blood, sweat and tears into a program, this senior class is a prime example of giving your all. Both Baehre and Trapp have both tore ACLs while at Clemson, and both worked and rehabbed to get back on the court for their team.

During their time in Clemson, the trio have produced a 76-45 record, made it to the Sweet-16 in the NCAA Tournament as freshmen, broke the 0-59 streak in Chapel Hill, and defeated three top-six teams in the nation on their home court in a single season.

Off the court, the trio have been prime examples of the type of young men you want in your program. Their interactions with the Clemson community and the fans are a major reason that Littlejohn was completely packed before COVID. Clemson football coach Dabo Swinney always talks about the character of the players he recruits, Brad Brownell hit on that with all three seniors that will be recognized Saturday inside of Littlejohn Coliseum.

To Aamir, Clyde and Jonathan, thank you for everything you have done for this team, this community and this university.

Clemson football by the numbers: Defense buckles under pressure, attrition in Raleigh
Post your comments!