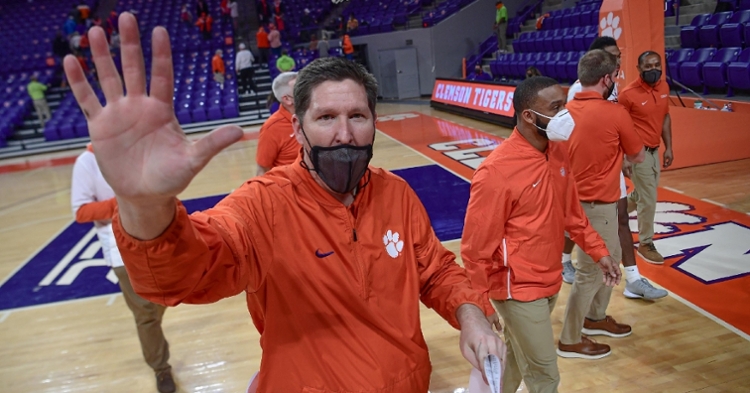 Brownell has to replace several key pieces this season.

After a disappointing ending to the 2020-21 basketball season in the Round of 64 during the NCAA Basketball Tournament, Brad Brownell and his Clemson Tigers basketball team are back and preparing for another season inside of Littlejohn Coliseum. Clemson ended their season with a loss to Rutgers to open March Madness last year, and as it went during much of the season, could not buy a bucket down the stretch during the waning moments of a game as they saw their season come to an end.

Brownell will have to replace the heart and soul of the team last year, with forward Aamir Simms signing with the New York Knicks as an undrafted free agent for the upcoming NBA season. The 12th-year head coach knows replacing Simms won’t be easy, but thinks some of the transfers that are coming in will be able to contribute right away.

“We’re going to miss a lot about him (Simms),” Brownell said at the ACC Tipoff Media Day on Tuesday in Charlotte. “Obviously there’s not one guy you’re going to go recruit or sign that’s going to be like him, but I do think that we brought in some guys like Naz Bohannon and David Collins that are experienced and older players. We have guys like Hunter Tyson that has been in our program for four years and understands our culture and what’s important to Clemson.”

Both Bohannon and Collins are graduate transfers who contributed to both of their teams last season before entering their names in the transfer portal. Bohannon, a 6’6 230-pound forward from Youngstown State, will bring some scoring to the team. He averaged 16.5 points last season for the Penguins and grabbed eight rebounds a game. Collins, a 6’4 220-pound guard, will be a solid option at the two guard for Brownell and his staff. Collins was a top-10 all-time scorer at USF and averaged just over 12 points and 3.5 assists per game last season for the Bulls.

Another few key pieces of Clemson’s team left to find new places to play after last season including guards Clyde Trapp Jr. and John Newman. This season, players like Al-Amir Dawes, Nick Honor and Alex Hemenway will need to step up and play more minutes, something their coach has full confidence in them to do.

“We do have experienced guards,” said Brownell. “Nick Honor and Al-Amir Dawes have both hit big, game-winning shots. They have started for us before and last year we played both of them, sometimes together. Alex Hemenway is an experienced player for us that can really shoot the ball. Our experience this year is going to come from our backcourt and guys that have played a lot of games.”

Brownell states that they were able to go get some big-name guys in the transfer portal due to the new, improved facilities as well as the success the team has had under him the last decade.

“I think we’ve done a good job over the last decade of improving our brand and building our program,” said Brownell. “The facility improvements we did five years ago are really starting to pay off, and it shows Clemson really wants to be good in basketball. I think we’ve done a good job at building our brand and program to show where kids are coming here and having good success and development. We’re being productive, we’re winning games and we’re graduating players. When you get to bring in guys like Naz or David Collins and they can see all that Clemson has to offer, I think it’s impressive. They’ve seen success on the court, Sweet Sixteen and NCAA Tournament teams. They see a good place to go to school.”

Clemson will open its 2021-22 season with three home games the second week of November against Presbyterian, Wofford and Bryant before participating in 2021 Shriners Children’s Charleston Classic for their tip-off tournament.