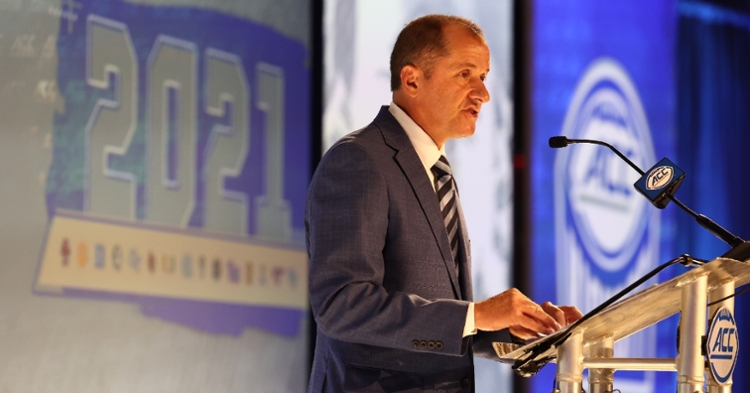 Phillips covered a variety of topics Tuesday in Charlotte.

CHARLOTTE - In his first ACC Tipoff as the league’s commissioner, Jim Phillips opened the proceedings on Tuesday morning with an interview session that touched on a wide range of the major issues.

Phillips, the former athletic director at Northwestern University who succeeded John Swofford as the ACC’s commissioner earlier this year, answered several questions that touched not only on basketball, but on football, storming the field after games, and the impact that the NIL has had on college athletics and specifically the ACC.

Here is a partial transcript:

JIM PHILLIPS: Well, first I think just to go back, the two overriding principles of that, one was to do something for the stabilization of, I think, hopefully college sports, certainly the Power Five and maybe other conferences, to stabilize it in a rocky period.

I think you're going to see that. I really do. There are three things that we have and consistently worked on over the last 45 to 60 days in our weekly meetings. One is the student-athlete experience, best practices on and off the court, what are the things that we can and should be doing for our student-athletes that represent 28,000 young men and women over the 41 schools.

Second is to come together on legislation and issues, future of college athletics with like-minded schools and to work collaboratively with all conferences, but certainly start within the framework of the three Power Five conferences.

QUESTION: As it relates to the ACC Network or just on the distribution front, are there any updates you can provide?

JIM PHILLIPS: Been one of the top priorities just coming in nine months ago or however long ago it's been to try to get distribution. I heard it loud and clear when I went on those 15-campus visits. We have this tremendous network. It's still in its infancy stage, a couple years old, but the distribution piece has been really important.

We have locked arms with Disney and ESPN and the network and the conference in order to push forward. We've had some great wins this summer with MediaCom and NCTC, which provided some new distributors to carry the ACC Network.

Then recently we were able to renew our deal with Altice. So we're down to Comcast and I am really optimistic about where that's going, but nothing of substance today. I just know we're getting really close.

I would just say this: I had a chance recently to visit with Jimmy Pitaro and Burke Magnus, and they've been incredible from a Disney and ESPN standpoint. Again, I'm really optimistic that we'll get to the right place.

Q. When you were covering the ACC kickoff, you spoke very extensively about the NIL and how you guys were looking forward to that and at the time it was a new ruling. Now we are months into it with football in full swing and now basketball kicking up. What can you give insight on as far as what you guys are doing to spread that into basketball and how you guys are helping facilitate that for the new upcoming basketball season?

JIM PHILLIPS: Well, a couple things. Really proud of how our 15 schools have handled that, and I think you're seeing some really great success stories across a variety of our membership, as well as a variety of sports. I feel really good about the educational piece to this.

That cannot continue, because the inequities are locally, whether it's through various sports. I'm concerned about our Olympic sports and what is done for them or not done for them compared to the revenue-generating sports.

Secondly, from a conference standpoint, your conferences are not the same. None of our conferences have the same rules based on because of where their state is or what institutionally they've decided.

Third, nationally, if we're going to continue to have National Championships and play a national schedule and do things across the entire country, you have to have a national standard, and I'm really -- I'm very proud of the 15 ACC student-athletes and the 15 ACC SAC student advisory councils that came together to write that letter to Congress for help, for immediate help.

What I said this summer was the sense of urgency will be over when July 1st comes, and that happened because people are seeing the success stories. But they're not paying attention enough to what some of those inequities that have bubbled up since that time.

Q. SEC fined Texas A&M $100,000 for storming the field after the win over Alabama. What's the ACC's current policy on field/court storms, and has anyone in your tenure so far been disciplined for that?

JIM PHILLIPS: Yeah, it's a great question. Because of some of the incidents happened that not only you mentioned, but also in our conference we've had a recent -- several recent discussions.

Right now we have not fined anyone within the conference. We are discussing what those rules look like.

We should expect more of those kind of scenes. We shouldn't be surprised when we have that just because of, I think, the intensity that these games are played at, the excitement and the enthusiasm of having fans back and having students back.

We remain in discussion on it, but as of now, no fines have been levied, and we'll move forward from this point.

Q. You were front row center six years ago when Northwestern's athletes attempted to unionize, and now within the National Labor Relations Board general counsel issuing the memo, it's back on the front burner. Have your thoughts changed on that? Are you still opposed? Where do you think this issue is going to go now?

JIM PHILLIPS: Appreciate it, and I was asked a similar question this summer. What I would say to you is my stance hasn't changed. These are not employees, and this is not an employee/employer relationship.

A lot has changed in the last six years since we went through that at Northwestern, and I'll reiterate what I said before. I was proud of that group of student-athletes. I was. We asked them to be leaders on campus. We asked them to bring up issues that they are passionate about.

We're always supportive of that, and that has not changed over the last six years for me, and I know for the ACC.

There's a lot that has happened since that time: Unlimited meals, the ability to transfer, name image and likeness, the list goes on and on. So we've made some really good progress from that standpoint goes.

Ultimately we'll see where the NLRB goes with this, if this ends up being more than just a statement that came out a few weeks ago, and we'll watch it.

But in my heart and soul, I believe in the collegiate model. These are students first and foremost, and they play a sport. Again, there's nothing in my beliefs that state that this is an employee-employer relationship.

JIM PHILLIPS: Sure. It's a fair question. What I would say is we have made progress. We're in 7 million new homes now with Altice, MediaCom, and NCTC. These deals are never that easy. They're just not.

Comcast knows the importance of the ACC Network moving forward to Disney and to ESPN, and we also understand Comcast has some things that they're trying to work through. But it's very amicable and we are farther along than we were in July, so there has been progress.

Again, optimistic about getting this thing done.

Q. I just wanted an update on the firm you hired to look at the ACC headquarters; how many locations is the firm investigating? And given all that's on your plate as you described, why did you feel right now was appropriate to look at that issue?

JIM PHILLIPS: Well, I'll give you maybe just a quick history of it. Before I even joined the ACC family I had heard kind of inklings that maybe there was thought of maybe the conference may move, may not. You don't know what's true and what's not so it's all speculative.

Coming in I didn't have any preconceived ideas about any of that. I really didn't. But when I got to the end of my tour, I realized we needed to have an assessment of the whole entire ACC structure, staffing, external, how we were focused, all of those things.

To exclude the location piece just would have been a disservice to what I was asked to do, and that's lead an entire conference.

This has also been through, again, a very transparent and very disciplined process. The first part of it, along with the evaluation of the structure and staffing and responsibilities, roles of the office that's led by Jim Delany and Kevin Weiberg. They've been our consultant there. We felt like we needed a consultant that specialized in strictly location of organizations, of companies.

We hired Newmark, and we are in that first phase with them. The assessment right now is just of Greensboro, either staying where we're at in Greensboro in the same building or another part of Greensboro.

The presidents will decide if there is a phase 2, which would mean we would start to talk with other cities. I have not had one conversation with any city. I have not. And that's the gospel. I have not.

There have been inquiries and the rest of that. I think that taints a process. That's unfair. We need to do this thing, again, very transparent.

I know the history of May 1953. I know how much the ACC means to Greensboro. I wasn't, again, looking initially at this, but as I started to formulate my own ideas and listening, this was something that has to be done, and I really like the way that this is being handled right now.

Q. Obviously with the SEC, the Big 12, the American, there's been a lot of movement and realignment. Do you think it's over, and how do you assess the ever-changing environment we have in collegiate athletics?

JIM PHILLIPS: It's always best when it's stabilized, so I hope it's going to be over soon. I think we all will because we have to settle in. How are we able to build an NCAA constitution in the future of college athletics unless we can get some stability because maybe we're creating a new model that will be outdated the moment we have additional membership change.

I really do hope it settles down, and I think that it has and will. I'm hopeful. But it is part of the ecosystem of college athletics over 100 years, so it's never going to stop completely.

I would just probably finish there, that I really do -- will do everything I can to get things settled down, and for us to look forward towards, again, refocusing on our student-athletes, refocusing on the future of college athletics, refocusing on the place that the NCAA is going to hold for college athletics and dive back into that access and afford built for a group of young men and women that may not have had access to college and for it to be affordable if it weren't for this opportunity to play sports."