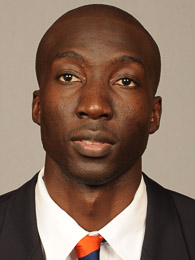 Forward
B I O
Overview: First junior college player to sign a National Letter of Intent with Clemson since 2003...looks to compete for the starting power forward position for the Tigers, a spot vacated due to the graduation of Milton Jennings...will need to add strength to his wiry frame, but has an ability to step out of the lane and shoot to three-point range...recruited to Clemson by Assistant Coach Earl Grant...he also had scholarship offers from Saint Louis, Kansas State, Southern Illinois and several other Division I programs...majoring in communication studies...name is pronounced EE-bruh-heem JAHM-boh.

In Junior College: Played two seasons at Three Rivers Community College in Poplar Bluff, MO...averaged 17.7 points and 9.2 rebounds per game in 2012-13...added 1.5 blocked shots per game in 26 appearances...led Three Rivers in all three statistical categories...All-Region XVI Team and All-Midwest Community College Athletic Conference selection...started 22 games...scored 20 or more points in eight games...scored double figures in all but three games...season-high was 33 points on Nov. 23, 2012 against Eastern Oklahoma State College...made 10-of-15 shots and 10-of-12 free throws in that game...posted 28 versus Kennedy-King College, which included and 8-for-8 performance at the charity stripe...scored 29 points against Highland Community College, converting 9-of-17 field goals and 10-of-12 free throws...shot 35.4 percent from three and 74.6 percent at the free throw line...made season-high five three-point shots versus Kennedy-King in a Dec. 14, 2012 matchup...coached by Gene Bess...born 7/14/92.