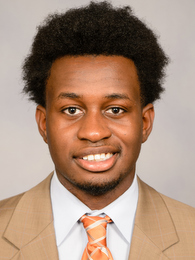 Guard
B I O
Overview: Signed in the fall of 2012 with the Tiger basketball program...long, lean player who will see time as a backup at the shooting guard and small forward positions...will have to make a big adjustment from the SCISA (South Carolina Independent Schools Association) level to the Atlantic Coast Conference, one of the premier college basketball leagues in the country...will be an important factor within Brad Brownell's program moving forward because of his ability to score the basketball...comes by way of Columbia, the same general area of South Carolina that sent current Tiger sophomore Jordan Roper to Clemson...named Mr. Basketball in the state of South Carolina at the SCISA level...recruited by Assistant Coach Earl Grant...majoring in communication studies.

2014-15
Played in 30 of the 31 games, averaging 12.1 minutes per contest ... averaged 3.1 points and 1.8 rebounds per game ... shot 35.7 percent overall, 27.5 percent from three ... numbers were higher against ACC competition (3.8 ppg, 33.3% from three) ... logged consistent minutes down the stretch, averaging 15 minutes per game over Clemson’s final 15 contests ... scored at least five points in seven straight games to conclude the regular season, with a high at Georgia Tech ... showed active hands defensively with 19 steals.

Best Games, 2014-15
Posted season-high 10 points at Georgia Tech on 4-of-6 field goals, while adding three steals ... scored seven on two occasions, versus Florida A&M in the opener and at Florida State in a critical ACC road win ... posted six points in 23 minutes against Nevada in the Paradise Jam ... posted six points on 3-of-6 shots at Duke ... notched six in 22 minutes, with three steals, in home win over Georgia Tech ... posted six against NC State in home finale, and six at Notre Dame in final regular season game in 22 minutes.

2013-14
Played significant minutes in each of the last nine contests of the season, averaging 10.7 minutes per game during that stretch ... averaged 2.3 points and 1.0 rebounds per game as a freshman ... shot 40 percent overall, including 42.9 percent from three-point range ... played double figure minutes in nine games ... made at least one three-point shot in five of Clemson’s last seven games ... scored in 15 of his 25 appearances ... added nine steals defensively.

Best Games, 2013-14
Scored season-high seven points in six minutes against Davidson in the second round of the Charleston Classic ... posted six points in 18 minutes at home against Pittsburgh, with two steals ... also scored six on 2-3 shooting against ACC Champion Virginia in 13 minutes ... both makes were from three, and also added nifty alley-oop assist to K.J. McDaniels in the second half ... posted five points in 13 minutes against Maryland ... scored in all three NIT games, with a high of five against Belmont ... posted three points and four rebounds in season-high 23 minutes versus Illinois ... scored four at Pitt and four at North Carolina in back to back games.

In Italy (August 2013): Started one game and played an average of 15.3 minutes over four contests...reached double figures in the second game with 11 vs. Dream Team Italy...averaged 6.3 points and 3.5 rebounds per game on the trip...collected six steals and had only two turnovers in over 60 minutes of play...posted nine points in the final game against Airte, where he was 4-for-8 from the floor with three steals.

In High School: Three-star prospect according to ESPNU and Rivals.com...rated the No. 2 prospect for the class of 2013 in the state of South Carolina by ESPNU...rated the nation's No. 30 prospect at his position by ESPNU...nominated for the McDonald's All-America Game...three-time all-state selection at the SCISA level...leading scorer in Cardinal Newman High School history...led the Cardinals to State Championship as a senior in 2013, he scored 23 points in the final versus rival Hammond...posted 18 of game-high 34 points in AAA state semifinals against Porter-Gaud in the fourth quarter alone...Most Valuable Player at the 2012 Home Pest Control Holiday Classic, where he scored 23 points in the championship game to propel the Cardinals to the tournament crown...played in the City vs. State All-Star game held at Benedict College...2011-12 Statewide SCISA Player of the Year according to the High School Sports Report...averaged 21 points, 9.0 rebounds and 2.5 steals per game as a junior...played AAU ball for the South Carolina Elite...coached by David Ross at Cardinal Newman...earned three varsity letters in football as well...also considered the University of South Carolina...born 7/13/95.