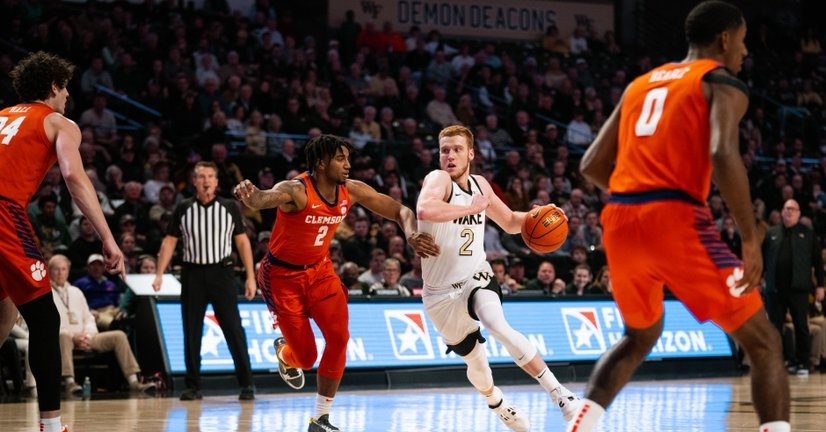 One streak continued and quite a few others came to a close in No. 19 Clemson’s 87-77 loss at Wake Forest on Tuesday night.

The Demon Deacons extended a run to 15 consecutive home wins, while dealing Clemson its first loss in its last 12 regular-season ACC games (school record), first defeat in ACC play this year (after a program-best 7-0 start) and a first loss in the last eight games overall this season.

The Deacs held a healthy halftime advantage on the strength of hot shooting.

Wake Forest led by as much as 11 points in the first period, shooting 50% from the field overall and from beyond the arc (6-of-12).

Down starting guards Chase Hunter and Alex Hemenway to injury, Clemson needed some scorers to step up and PJ Hall filled the void in the first half, scoring 14 points in his first 14 minutes on the floor. Tigers leading scorer Hunter Tyson started slow but hit a trey in the closing minutes of the first half to go into the break with seven points.

Damari Mansanto hit Wake’s 11th and 12th free throws of the first half with 14 seconds left to lead 48-38. It was the first time Clemson had given up over 40 points in the first half this season and the most points given up in any half on the campaign. The Demon Deacons held a seven-point advantage at the break of the first meeting, however, before falling by 20.

The Deacs jumped on the Tigers out of the gate this time and extended the edge to 15 points within a couple minutes.

Starting in place of Hunter at point guard, redshirt freshman Josh Beadle tallied his fourth foul before the 15-minute mark. He was 3-for-3 from the field with six points but without an assist through 12 minutes on the court to that point.

Brevin Galloway stepped into the void shortly after to reach three buckets in the half within a run that helped cut the Wake Forest lead back to seven with 12:19 left and prompt a timeout call.

As Wake seemed to be pulling away again, freshman Chauncey Wiggins hit the 4-point play to cut the deficit to six with under 10 to go. That’s the closest Clemson would get, however.

The Demon Deacons answered with a 7-0 run to bring the lead back to double digits.

A Tyson dunk and free throw with just over two minutes left brought the advantage back down to six, but Wake’s Cameron Hildreth answered with a 3-pointer on the next possession and the Deacs kept the Tigers at bay from there.

"We couldn't win the one-on-one matchups today very well," Clemson coach Brad Brownell said. "I gotta go back and watch the film and see -- we just didn't quite have as much juice. Some of that is playing here and it's playing against a team that plays faster. So it wears on you. Our young guards got exposed on some things a couple times early. Made some defensive errors...A lot of credit to those guys (Wake). I thought they played well...

"That's why they're good. They've got multiple guys who can make plays. They're a really good offensive team. They can spread ya. They shoot it well and they're experienced...They're a tough cover."

The ACC first-place Tigers return home looking to sweep the regular-season series with Virginia Tech in a 6 p.m. start on Saturday.

Clemson-Wake box
Get the latest Clemson gear right here!
Comment on this story