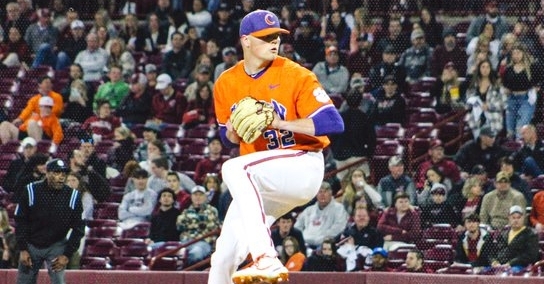 Mack Anglin looks to get Clemson off to a good start on Friday in a key series with Georgia Tech.

CLEMSON, S.C. - After four days off for final exams, the Tigers host No. 21 Georgia Tech in a three-game series at Doug Kingsmore Stadium.

• Clemson, who has a 20-8 home record, was swept in three games at No. 10 Louisville last weekend.

• Georgia Tech, who has a 6-8 road record and is averaging 9.3 runs per game, is led by 29th-year Head Coach Danny Hall.

• Due to the shortened season in 2020, Georgia Tech has not played at Clemson since 2018, when the Tigers swept the three-game series.

• Clemson hit a season-high six homers at No. 10 Louisville on May 1. The Tigers have hit exactly five homers in four other games.

• Max Wagner leads the team with 21 home runs, including 11 long balls in the last 11 games.