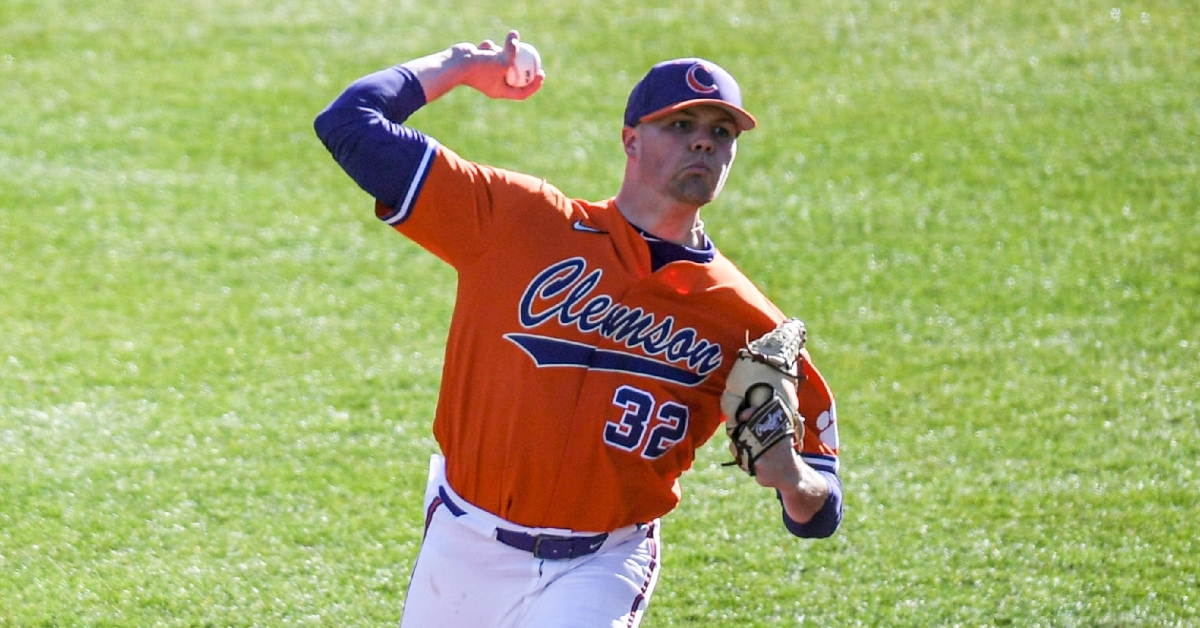 Mack Anglin was named third-team All-ACC this week and he takes the ball in game one. (Photo: Ken Ruinard / USATODAY)

CLEMSON, S.C. - The Tigers travel to the 48th ACC Tournament as the No. 12 seed at Truist Field in Charlotte, N.C.

• Clemson, who has a 3-1 neutral record, swept Boston College in three games by a combined score of 26-3.

• North Carolina, who has an 0-1 neutral record and is averaging 6.5 runs per game, is led by second-year Head Coach Scott Forbes.

• The Tar Heels swept Florida State at home last weekend. They are hitting .280 and have a 4.33 ERA and .972 fielding percentage.

• Danny Serretti is hitting .369, Vance Honeycutt has 17 homers and 28 steals and Alberto Osuna has a team-high 19 home runs.

• Virginia Tech, who has yet to play a neutral game and is averaging 8.4 runs per game, is led by fifth-year Head Coach John Szefc.

• The Tigers are the designated visiting team and occupy the first-base dugout on Tuesday.

• Clemson is the designated home team and occupies the third-base dugout on Thursday.

• The games are played at Truist Field in Charlotte, N.C.

• It is the second time and second year in a row the ACC Baseball Tournament is held in Charlotte.

• The 2022 tourney’s format has four three-team pools. The winner of each pool advances to a four-team, single-elimination tourney.

• The format, in its fifth tournament, features four three-team pools that guarantees the 12 teams play a minimum of two games.

• Pool A is comprised of No. 1 seed Virginia Tech, No. 8 seed North Carolina and No. 12 seed Clemson.

• Pool B is comprised of No. 2 seed Louisville, No. 7 seed Georgia Tech and No. 11 seed Pittsburgh.

• Pool D is comprised of No. 4 seed Notre Dame, No. 5 seed Virginia and No. 9 seed Florida State.

• The ACC Championship Game is Sunday at noon on ESPN2, and the winner of the game receives an automatic bid into the 2022 NCAA Tournament.

• All of Clemson’s ACC Tournament games are broadcast live on the radio by Clemson Athletic Network.

• Live stats are available at ClemsonTigers.com.

• This is the 48th ACC Tournament, and Clemson has been to the finals in 22 of the previous 47 tournaments, eight more than any other school.

• Clemson has won an ACC-high 10 ACC Tournament titles in history, including 2016, when it beat Florida State 18-13 in the title game.

• Only Florida State (66.1) has a better winning percentage than Clemson (61.0) in ACC Tournament play.

• It was the first time each was honored with an All-ACC accolade.

• Freshman righthander Austin Gordon has emerged as one of the team's top relievers late in the season.

• He has 27 strikeouts against only seven walks.

• He had 22 strikeouts against only two walks in ACC regular-season games.

• He pitched 3.0 scoreless innings with four strikeouts to record the save in the first game of a doubleheader at No. 9 Virginia on May 15.

• He retired all 10 batters he faced with seven strikeouts to record the save against Boston College on May 20.

• Max Wagner was named ACC Player-of-the-Year in a vote by the league head coaches.

• He became the 14th Tiger to earn ACC Player-of-the-Year honors and the first since Seth Beer in 2016.