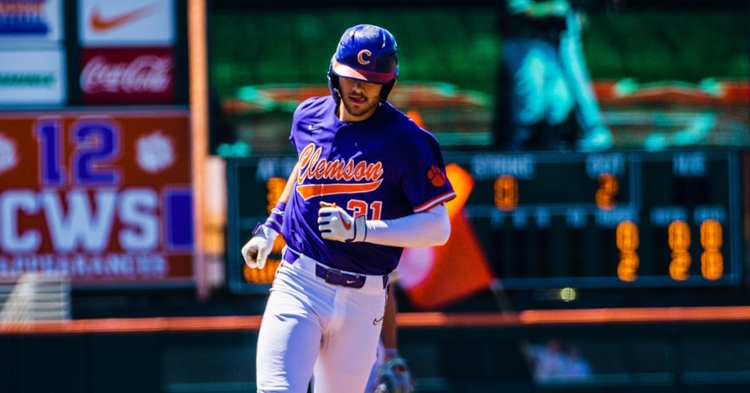 CLEMSON, S.C. - The Tigers host No. 16 South Carolina on Tuesday night in a game that was postponed due to inclement weather.

• Clemson, who has a 16-8 home record, was swept in three games at Georgia Tech by a combined score of 21-14 last weekend.

• South Carolina, who has a 7-10 road record, is led by fourth-year Head Coach Mark Kingston.

• The Gamecocks won one of three home games against Mississippi State. They are hitting .251 and have a 3.82 ERA and .975 fielding percentage.

• South Carolina is Clemson’s most-common opponent, as the two have played 326 times dating to 1899.

• The season matchups went to a three-game, weekend-series format in 2010 after the two teams played four midweek games for decades.

• South Carolina won the two previous meetings this season, both by one run on walkoff hits by Andrew Eyster.

BOB BRADLEY AWARD TO BE PRESENTED

• Since Adam Hackenberg returned from injury that forced him to miss the first 13 games of 2021, the Tigers have used two catchers.

• Hackenberg and Jonathan French, who was the predominant starter at catcher early in the season, have split time behind the plate.

NFL.com projection says not to expect much from this rookie Tiger
Post your comments!