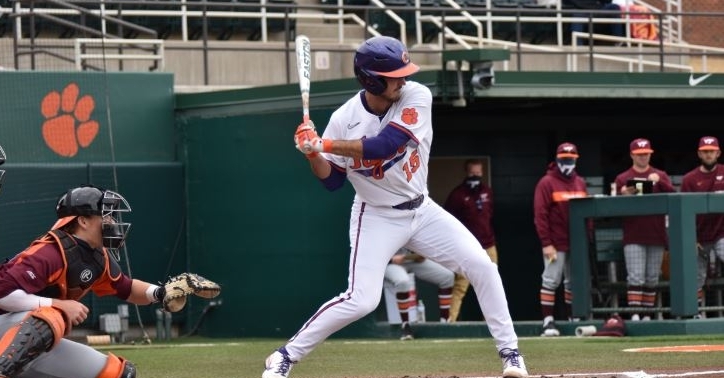 CLEMSON, S.C. – James Parker’s three-run homer on an 0-2 pitch with two outs in the eighth inning lifted Clemson to a 4-2 win over No. 13 Virginia Tech at Doug Kingsmore Stadium on Sunday afternoon. The Tigers, who won the series 2-1 and claimed their seventh series win in a row over the Hokies, improved to 8-9 overall and 3-6 in the ACC. The Hokies dropped to 10-8 overall and 6-6 in ACC play.

After the Hokies scored an unearned run in the fourth inning, Elijah Henderson lofted a run-scoring single with two outs to tie the score in the fifth inning. Dayne Leonard led off the top of the eighth inning with a home run, the first of his career, to right-center to give Virginia Tech the lead. After the first two batters of the bottom of the eighth inning were retired, Kier Meredith walked and Dylan Brewer was hit-by-pitch. Parker followed with a three-run home run to right-center on an 0-2 pitch, his fifth of the season and third game in a row with a long ball.

Geoffrey Gilbert (1-1) earned the win by pitching the final 2.0 innings. Tiger starter Keyshawn Askew gave up just three hits and one unearned run with a career-high seven strikeouts in 4.0 innings pitched, while Nick Clayton tossed 3.0 scoreless innings in relief of one-hit ball. Noah Johnson (0-2) suffered the loss. In his first start of the season, Shane Connolly (1-1) pitched 7.0 strong innings. He gave up just three hits, one run and no walks with 11 strikeouts.

"What a great baseball game," Monte Lee said postgame. "We pitched outstanding...In a weekend where we didn't have Davis Sharpe available (Saturday), we really needed someone to step up for us today in the rubber match and Keyshawn was absolutely outstanding. We used him as long as could have on a 60-pitch count limit...He threw a heck of a ballgame. Nick Clayton has been outstanding for us lately. He pitched well. And I'm really proud of Geoffrey Gilbert -- nobody competes harder...

"Jimmy Parker is in the 3-hole for a reason, because he's the man we want up at the plate in high-leverage situations. Got down into an 0-2 count and thank God the wind was blowing out to right field a little bit and he got it up in the air...Just proud of our guys."

The Tigers travel to SRP Park in North Augusta, S.C. to take on Georgia Southern on Tuesday at 6:30 p.m.

With two outs & two strikes on him, @james_parker15 COMES THROUGH with a three-run blast, his third homer of the weekend! The Tigers now lead 4-2! ????

In the fifth inning, @elijahsixhender ties is up with a two-out single that scores @BryceTeodosio13!

Give it up for @keyshawn_askew. In his first start of the season after returning from injury, his final line today: