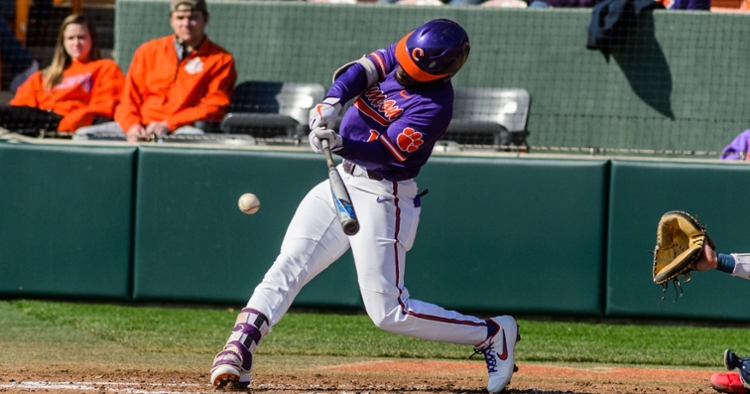 The Tigers play their first five-game week of the season when they host Presbyterian College (Tuesday) and Winthrop (Wednesday).

• Clemson, who has an 11-2 home record, swept Boston College in three home games by a combined score of 23-14 last weekend.

• The Blue Hose lost all three home games against Connecticut. They are hitting .193 and have an 8.24 ERA and a .936 fielding percentage.

• Kyle Merkle and Landon Shaw both have two home runs, while Kyle Benson has the team’s lone save.

• The Eagles won two of three games at George Mason last weekend. They are hitting .294 and have a 2.88 ERA and .966 fielding percentage.

• Scout McFalls is hitting .389 with six steals, Spencer Yankle is batting .370 with a homer and 14 RBIs and Colten Rendon has four saves.

• Tiger Director of Player Development Ben Paulsen, who played at Clemson (2007-09) and later played in the majors, is the son of Tom Riginos.

• Adam Hackenberg, who has started all 15 games at catcher, is the only Tiger to start double-digit games at one position.

• Clemson is tied for first place with Notre Dame in the ACC Atlantic Division standings with a 3-0 league mark.

• Overall in the ACC standings, Clemson is tied for first place with Miami (Fla.) and Notre Dame.

• Freshman lefthander Geoffrey Gilbert has been one of the first pitchers Head Coach Monte Lee calls on out of the bullpen.

• He has not allowed any of his six inherited baserunners to score.

• He pitched 5.0 combined innings without allowing a run in two relief outings against Boston College on March 6,8.