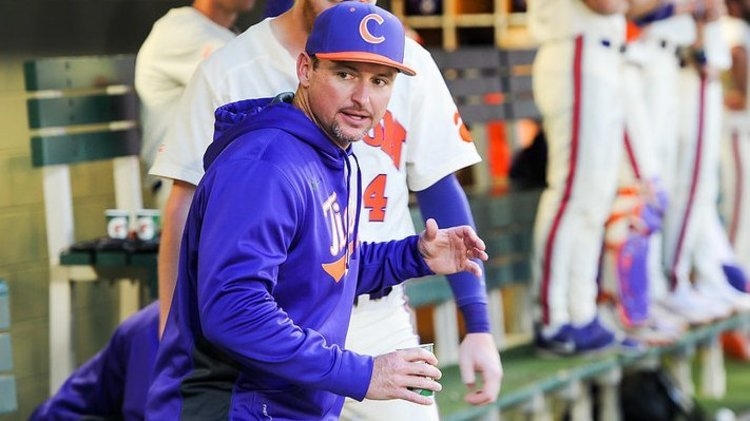 Ejections in the Georgia Tech series finale carry into the Gardner-Webb series - and beyond for a couple players.

Tiger Head Coach Monte Lee is suspended for one game and pitchers Holt Jones and Sam Weatherly are suspended for four games each due to events that occurred in Clemson's game at Georgia Tech on Sunday.

A warning was issued by an umpire to both teams in the fifth inning. Weatherly and Jones, who both entered the game after the seventh inning, were ejected in the eighth and ninth innings, respectively. Lee was automatically ejected as a result of the latter ejection.

NCAA rules state that when a pitcher is ejected, that pitcher must serve a four-game suspension. Also due to NCAA rules, Lee is suspended for one game.

After five days off for final exams, the Tigers play Gardner-Webb in a home-and-home weekend series starting Saturday.

• Justin Kunz is hitting .335 with nine homers, Chandler Redmond is batting .289 with 15 homers and Jarrett Thompson has seven saves.

• Clemson totaled 42 hits, including eight homers, one triple and eight homers, in the three-game series at No. 11 Georgia Tech last weekend.

• Baseball was one of six Tiger programs in the top-10 percent of their sport in the eligibility, graduation and retention metric for 2017-18.

• Clemson is one of only 17 Division I baseball programs recognized in each of the three most-recent reports.

• Clemson is one of only four Power Five Conference baseball programs recognized in each of the three most-recent reports.

• Clemson was one of only two ACC schools (Notre Dame) to earn recognition for baseball for 2017-18.