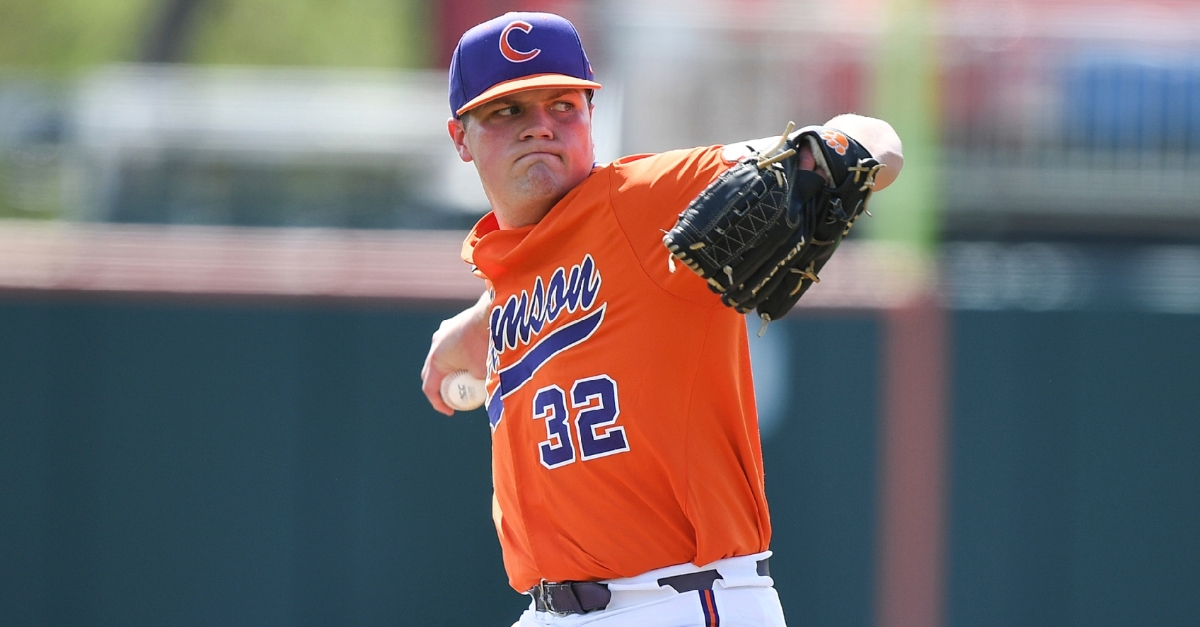 Anglin pitched six-plus innings of 1-hit and shutout baseball in his first outing in over a month. (ACC photo)

Behind Mack Anglin’s first collegiate victory, the Clemson baseball team defeated the Virginia Cavaliers 6-1 on Friday at Doug Kingsmore Stadium. Following an hour and seven-minute weather delay in the seventh, Mat Clark recorded a nine out save, his second save of the season. The Tigers move to 15-11 on the season and 9-7 in league play.

Anglin (1-1) made his second start of the season and threw himself a gem of a game. Anglin retired 20 of his first 21 batters and did not allow a hit until a two-out infield single in the sixth inning. The redshirt freshman from Ohio’s final line consisted of one hit in 6.0 innings pitched and a season-high-tying six strikeouts.

James Parker had a nice day at the plate, driving in two runs and hitting 2-of-5 from the plate. The two RBIs on the day gave the infielder 19 on the season, good for third on the ball club. Redshirt sophomore Adam Hackenberg also drove in two runs on a single in the third inning.

The two teams will meet back on the diamond tomorrow at 7 p.m. and that game can be seen on ACC Network. The final game of the series is scheduled for a 1:00 p.m. start on Sunday and that game will be broadcasted on ESPN2.

The Tigers threatened early, putting Kier Meredith and Dylan Brewer on second and third with one out in the bottom of the first inning. Clemson was unable to get anything on the scoreboard though, as a strikeout and groundout thwarted the threat and it remained a deadlock at zero.

Clemson was able to get on the scoreboard and take the lead in the third, loading the bases after a leadoff walk, a bunt single and another walk. Parker gave the Tigers the lead on a RBI groundout single to the second baseman, and was lucky it was not a routine 6-4-3 double play as the Cavalier's fielder bobbled the ball. The catcher, Hackenberg, extended the lead with a two out two RBI single to left center field and opened the Clemson lead, 3-0.

Bryce Teodosio led the fourth off with a single and after a groundout moved him to second, he took third on a wild pitch with one out. Henderson increased the Tiger’s lead the next batter, driving in his eighth run of the season. Parker drove in his second run of the afternoon two batters later to push the Clemson lead to 5-0.

After weather delay, Clark made his seventh appearance of the 2021 campaign. Virginia rallied against the reliever for a run on two hits once the game resumed in the seventh inning.

The Tigers got the run back in the bottom of the eighth, as the left fielder Meredith singled and drove in his ninth run of the season. Clemson loaded the bases with two outs after a double from Parker and an intentional walk to Caden Grice, but a groundout to the pitcher closed the door on the threat and sent the 6-1 ballgame to the final inning.

Catcher @ahackenberg7 comes up with a clutch two-out single to score two runs! ??

Shortstop @james_parker15 keeps the rally going with a two-out single to score a run!

Clemson-Virginia box
Get the latest Clemson gear right here!
Comment on this story