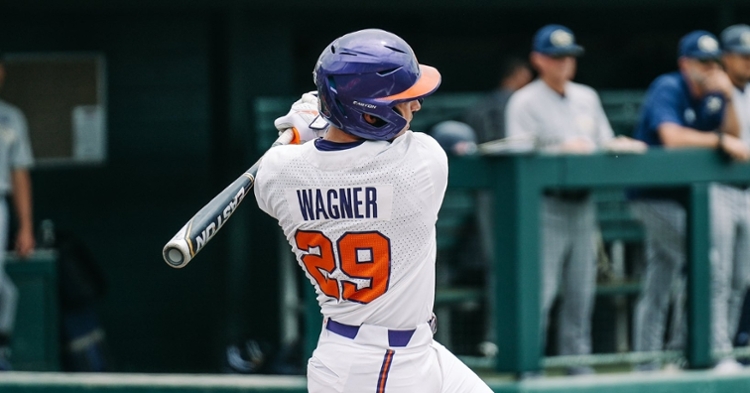 One dominant weekend sweep this time of year can change the equation, however, and the Tigers notched just that with the 14-2 series-capping victory over No. 21-ranked Georgia Tech (27-21, 13-14 ACC) at Doug Kingsmore Stadium on Sunday.

All-totaled, the Clemson lineup blasted 35 runs on the scoreboard to make things easier on its own pitching staff over the weekend.

The comfy lead Sunday came on the strength of five home runs in the first five innings.

Jonathan French got the long ball party started with an opposite-field shot to right field to put Clemson up 2-0 in the second, his second of the series. Georgia Tech right-handed starter Chance Huff (3-4), who entered the game with a 6.88 ERA over 12 appearances this season, didn’t escape the frame, leaving after Clemson second baseman Cooper Ingle sent a three-run homer deep to center field.

Clemson third baseman Max Wagner, one of the hottest hitters in the country, jumped into the action in the fourth inning with a two-run homer off of the scoreboard in left center field, for his team-best 22nd long ball of the campaign. Tigers first baseman Bryar Hawkins then made it another multi-home run frame with a solo shot to center field.

Making his first start of the season, freshman Camden Troyer sent his first career homer to deep right field in the fifth.

"It's a huge weekend for us but it was just a huge game for us," Clemson coach Monte Lee said postgame. "Again, not trying to look too much into series wins and shared the same thing with the team yesterday. We've won the series but it's not about winning series right now quite honestly. It's about winning every game. Because we're trying to do everything we can to extend our season. We all know the position we're in. We've just got to continue to fight like crazy to win every game and put ourselves in a position to get to the ACC Tournament.

"That's the bottom-line for us right now. It was great for us to win today because we needed to win today. We need to keep finding ways to win games."

Despite a still lacking conference record, Clemson (31-17, 9-14) was up Sunday afternoon to No. 18 in the RPI, a commonly-used metric for NCAA Tournament seeding. The Tigers also entered the weekend with the 13th-best record in the ACC, which leaves a team out of the upcoming ACC Baseball Championship in Charlotte (it takes the top-12 teams in the league), but they are now just inside the field after the sweep and some missteps from North Carolina and Duke.

Coming off taking its first ACC series sweep in over a year, Clemson concludes the conference regular season with a trip to Virginia and then hosts Boston College.

"We feel like we're in the playoffs every game. I told the team that and we're not going to shy away from it. We're going to have to show up and bring everything we can to win every game," Lee said, "to keep playing past two weeks from now."

Troyer tacked on a two-run single in the eighth inning for even more insurance, and he was a part of a Clemson lineup that's having to go deep and experiment a bit.

"(Tyler) Corbitt is out. Blake Wright is out. We had to compromise our lineup and move some pieces around, and do some different things," Lee said. "We played Cooper Ingle at second base and he's never played a game at second base in his life. And I'm proud of our guys because we said, 'Hey, we need to win these games anyway.' We've got to find a way to win even with some of our guys out. Next man up and we've just got to keep competing and find a way. Man, what a great job by some of those guys. The guys that got opportunities to play like Troyer today. To get an opportunity to play and swing the bat like he swung the bat and made a great play defensively in foul territory early in the game.

"It's just next man up and got find a way to win regardless of who's in there and who's not and I think it says a lot about our team."

Freshman right-hander Billy Barlow gave the Tigers a strong start Sunday, scattering four hits over 4 2/3 innings with five strikeouts to one walk with no runs allowed.

"I was just having a lot of fun. I felt loose and I felt free," Barlow said. "After the first inning and I saw the bats were rocking and rolling, I was just loose and free up there and having a good time."

The Yellow Jackets broke through in the seventh inning versus Clemson reliever Jay Dill (2-1) with an RBI single. Dill limited Georgia Tech to two hits and the one run for the decision, while Jackson Lindley backed him up by stranding two runners he left on base to get out of the seventh.

Clemson returns to action on Tuesday at Columbia’s Segra Park versus College of Charleston (7 p.m. start).

Atlanta native @frenchjonathan_ hits his second homer of the weekend!!!

COOOOOOOOOOP ????@IngleCooper blasts his eighth homer of the year to dead center to extend the Tigers' lead to five!!!

ANOTHER ONE!!!!! ??@bryarhawkins5 hits his sixth homer of the year to join the home run party at DKS!!!!

The freshman now has three RBIs on the day after a two-run single!!!