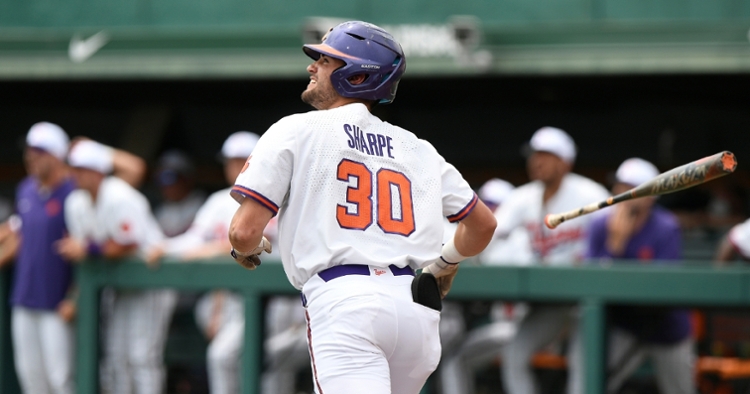 Davis Sharpe's 3-run HR gave Clemson an early lead it would only build on. (ACC photo)

On a day that the Clemson baseball team celebrated 12 Tigers for Senior Day, they also accomplished a feat that had never been done before. With a 15-5 win over No. 4 Louisville Sunday afternoon, Clemson became the only team to sweep the Cardinals in an ACC series since they joined the league back in 2013.

The Tigers greatly improved their NCAA Tournament chances with the sweep and move back to three games over .500 with an overall record of 21-18 and 15-12 in ACC play. Monte Lee's team has won six games in a row after consecutive weekend sweeps and finishes out its season with three more ACC series, next weekend traveling to Atlanta to take on Georgia Tech before heading to Tallahassee and finishing the season back home with Duke.

"What an interesting first inning," Lee said after the win. "Really proud of our club. They came out and switched the lineup up a little bit and hit those three home runs in the first inning and put up a big inning on us. Our guys came back and responded, we put a five-spot on them and then we were off and running."

True freshman Caden Grice drove in another pair of runs Sunday at Doug Kingsmore Stadium, giving him 12 RBIs on the weekend. The Greer native hit three home runs on Friday, and followed it up with another on Saturday. One of the players on the Golden Spikes Award watch list, Grice finished the weekend with four home runs, 12 RBIs and eight hits against the ACC-leading Cardinals. Grice is now hitting .348 on the season and has 12 round-trippers, tying him for the third-most in the ACC.

The Clemson offense put up double-digit runs for the second time of the weekend, recording 15 runs on 18 hits. Eight Tigers drove in a run and Davis Sharpe launched a three-run homer in the first inning to give them the lead after Louisville hit three solo home runs in the top of the first. Kier Meredith, Grice, James Parker, Adam Hackenburg and Sharpe all recorded multi-RBI games.

"The top of our lineup is about getting guys on (base) and not trying to do too much," Sharpe said. "I got a curveball and I hit it well and it changed the whole momentum of the game I think."

Clemson used a quartet of pitchers as Mat Clark started his third game on the season. Rob Hughes picked up his first victory of the season after tossing 1.1 innings and allowing a run. Geoffrey Gilbert also saw action and Nick Hoffman sent the Cardinals down 1-2-3 in the ninth to secure the sweep.

TIGERS TAKE THE LEAD!!@Dsharpe3 deposits a ball in the LF stands for a three-run ??!