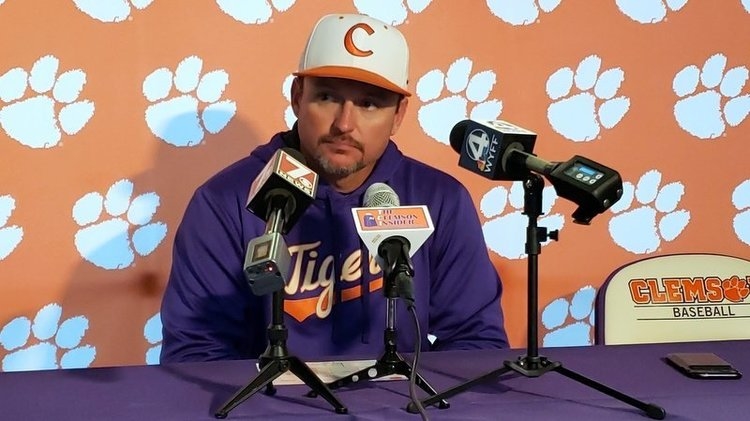 Monte Lee's Tigers take on Boston College at 11 am Tuesday

The tournament will run from Tuesday through Sunday at Durham Bulls Athletic Park.

Miami is the No. 4 seed and is joined in Pool D by No. 5 seed North Carolina and No. 9 seed Virginia.

Each team will play games against the other two members of their pool from Tuesday through Friday, with the top team in each grouping advancing to Saturday’s semifinals. The championship game will be played at noon next Sunday with television coverage on ESPN2.

Clemson enters the ACC tournament after finishing the regular season 33-23 (15-15). The Tigers are currently No. 38 in the RPI and are on the bubble heading to Durham.

“We’ve gotta turn the page. We’ve got the ACC Tournament coming up, and we need to be ready,” coach Monte Lee said. “It’s a new season now. It’s the postseason. Hopefully, we can find a way to be a little bit better as we head into the ACC Tournament.”

The Tigers will feel better about their chances of making the NCAA’s if they win at least one game in the ACC Tournament. Because Louisville is the No. 1 seed in their pool, the Tigers would have to go 2-0 in pool play in order to advance to Saturday’s semifinals. An 0-2 mark in the ACC might spell bad news for the Tigers’ chances to advance to the NCAA Tournament.

“Regardless of what our record is going into the ACC Tournament, we need to have some success. We need to play well in the ACC Tournament, whether we’re 16-14 or 15-15,” Lee said. “We certainly would have liked to have been 16-14 going into the ACC tournament. The bottom line is we’re 56 games into the season, and guys have got to step up and play their best baseball this time of years.”

The Tigers took two of three from Wake Forest last weekend, and shortstop Logan Davidson said the Tigers are confident heading to Durham.

“I think we have pretty high morale still. We're coming off of a good week. We took two of out three games against a really, really good ballclub,” Davidson said. “We'll take the series win. Going into next week for us will just be about our preparation and making adjustments for the mistakes we've had over the last couple of weeks.”

Davidson also likes the opportunity to play in Durham.

Davidson said one big difference this season is the fact that the Tigers are playing for the chance to make the NCAA Tournament.

“It's definitely different than the last two years. We're on the brink I guess you'd say versus knowing that you're going to have four teams in here trying to take something from you,” he said. “It's a little different playing for something at the end of the year like that.”

Grayson Byrd said the Tigers are relaxed heading to Durham.

“I think we feel good. Obviously, you never know with the committee and how it's going to work out, but we're definitely not going into the ACC Tournament relaxed,” Byrd said. “Obviously, we're going there to try and win the whole thing. We're going there to compete every pitch, to enjoy it. I guess you think about it a little bit, but it's not going cause any extra pressure on us or cause us to think, 'Oh, we have to win this game, or this is a must-win game.' We're just going to go out and play our game and just have fun.”